At this point I’d put more faith in the recent FOCUS adjustment (http://volby.sme.sk/c/6294451/spresnena-prognoza-focusu-dava-smeru-sd-82-mandatov.html) than my own, which are not based on regional patterns (that’s a project for some future effort–I don’t know what the FOCUS numbers are based on but they look OK), but for those who are interested here’s the trending for the parties on which I have a good read:

Smer, until the most recent numbers was running exactly at its 2010 rate plus 10%.  The most recent pushed the bottom of that window a bit.  Don’t know if this is a blip or a sign of a trend.  Still, hard to see Smer under 43 for the night 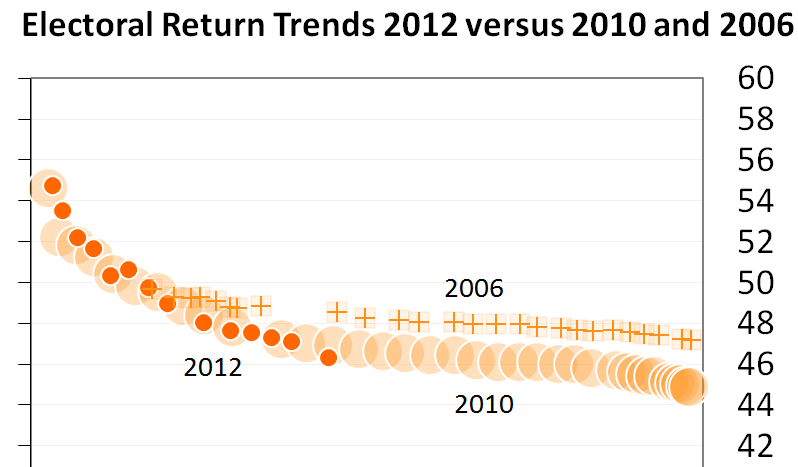 Thought I’d check out SNS as well.  Here’s the party’s election night trending.  The party’s election night profile is remarkably flat in both 2006 and 2010.  In 2006 it dropped then recovered.  In 2010 it kept dropping, to within 2000 voters of the threshold.  In 2012 the slide is even more pronounced.  Even a recovery in big cities that report late (as happened in 2006) might not be enough.  Not yet dead, but slipping further and further away. 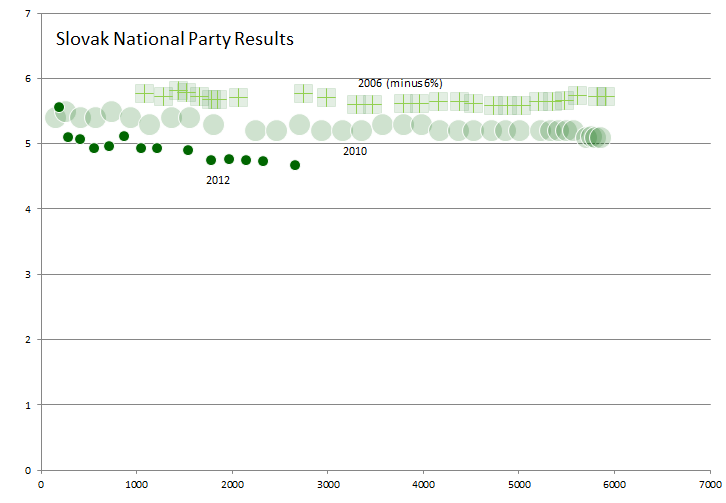 And finally the Hungarian parties.  Here the pattern is less pronounced for individual parties so I thought I would combine SMK and Most Hid to see what I get.  Even here the pattern isn’t as clear except tha tHungarian parties tend to rise as the night progresses.  Following current patterns, the two should together end up with between 11.75 and 12.75.  Since SMK has been getting just about .4 of the total of the two parties, this raises the barest hope that if the two parties do end up following the 2010 pattern, it could get about 5.1% of the vote.  But as the big cities report in, SMK’s share of the overall is dropping slightly, suggesting that it is Most-Hid that will be the bigger beneficiary of further growth and that it will be very difficult for SMK to make it.  They look to end up just barely outside parliament. 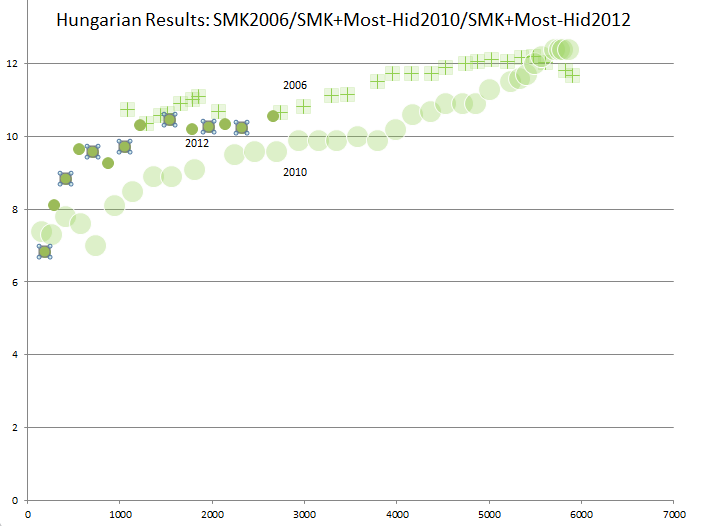