The New York Times gets into the act with an interview with David Cerny.  But when we read an interview with a man who just falsified biographies of 26 artists for a major EU commission, should we believe anything he says?  This is not a question that the Times addresses. 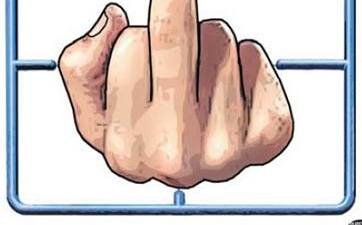 A Fistful of Euros–which does extraordinary work on European economies–offers another summary and links here.  And if that weren’t enough, there’s a link to its entry on European stereotype jokes here (some of them particularly stereotypical). 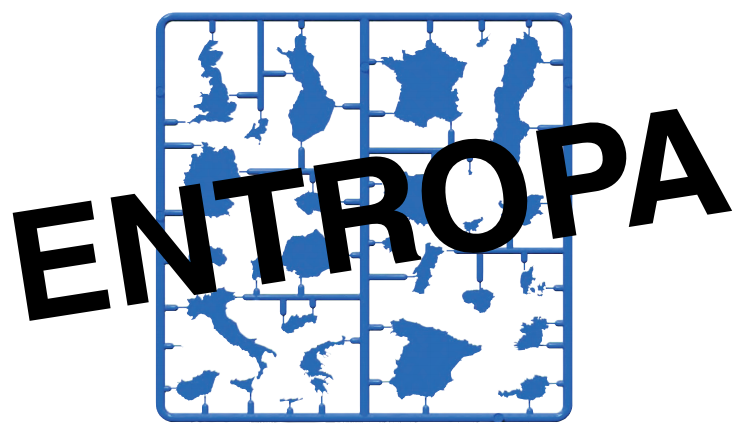 David Cerny’s exhibition catalog for “Entropa” is the only thing connected to the EU that has ever caused me to laugh out loud.

There is such remarkable cleverness here that I want to think about it out loud as well, but it is hard to do it without drifting into pretentious art criticism.  So I will be try to brief.

At face value Cerny’s proposal for the artwork claims to want to force Europeans to confront the offensive stereotypes they have about those from other member states and calls for “self-reflection” and “critical thinking”?  In other words, stereotypes are a joke.

But since the artwork seems to reinforce those stereotypes (ask Bulgarians about Turkish toilets), the artist claims (obliquely in the artwork’s catalog and explicitly in his apology) to want Europeans to ask whether they can tolerate the stereotypes that other Europeans have about their own respective countries, since the “capacity to perceive oneself as well as the outside world with a sense of irony are the hallmarks of European thinking.”  In other words, maybe the real joke is that people don’t get the joke.

This will keep people talking for a week or so, and an artist whose goal was to get people thinking about their stereotypes and their reaction to being stereotyped could be marginally satisfied at having provoked a discussion (something that does not seem to have happened with any previous rotating-EU-presidency art installation).  But while I don’t doubt that Cerny was aware of the possibility (and might even be happy with the result), I rather doubt that this was his goal.  If I were to guess the main “artist’s question” that was going through his hard when he made this, I would guess this one:

Can I get away with this?

Amid all of the (not uninteresting) arguments about stereotypes, offense and irony obscure the most remarkable thing about this work: that it is there at all.  He has succeeded in placing an artwork that many find deeply offensive into the middle of an EU building, and forcing Czech Republic to start its EU presidency with an apology.  Mission accomplished.

Without trying to pursue analysis for which I am not trained, the main point for me is the weakness of official power.  The point is that Cerny managed to get this past everybody, managed to invent artists from 26 other countries without anybody noticing, managed to insert the potentially offensive bits in full public view (the Bulgarian toilet is part of the catalog, couched in artspeak–” intentionally primitive and vulgar, faecally pubertal”) and–shielded by the debate (which he framed himself) over stereotype against “sense of humor” (and who wants to be accused of lacking one of those)–he may well manage to keep the thing hanging in Brussels for the next six months.  That is some remarkable art.

I may see this only because this is what I saw in the two other Cerny pieces that I encountered in public in the last two decades.  In spring of 1991 when I was teaching in Plzen I got a call from a friend to tell me to come to Prague and see “this amazing pink tank.” 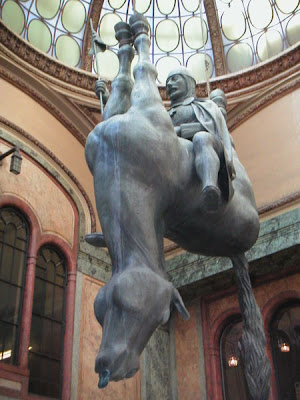 In 2000, I was cutting through the Lucerna pasaz in Prague when I came upon Cerny’s “Horse” and nearly fell down laughing.  Again, the amazing thing was that he had punctured–actually obliterated–a core national myth within a few hundred feet of the real statue (see http://www.ce-review.org/99/19/pinkava19.html and Cerny’s own webpage: http://www.davidcerny.cz/EN/vaclav.html, especially his commentary).

To overthink this for a moment (because the real point is that it is really funny), I think Cerny’s art is funny to me because it says that the powers that be are not as powerful as they think.  I’m sold on the theory (thanks to Mark Lutz) that one of the reasons we laugh is that we are relieved to find out things we were afraid of are actually not that fearsome.  If Cerny could manage to paint a tank pink or mock a national hero, then maybe there were a lot of things that the rest of us could get away with.  So in this sense Cerny’s exhibits follow in the tradition of resistance through humor from the Good Soldier Svejk to the Theater of Jara Cimrman and the staged actions of the Committee for a Merrier Present (Spolecnost za veselejsi soucasnost), except that Cerny’s work came after the fall of Communism.  (Havel’s Power of the Powerless suggests something like this, suggests that western governments have their own kind of anonymous bureaucracy; Terry Gilliam’s Brazil makes the same point).  The fact that such guerilla art was still funny said something about our continued fear of the powers that be–from the continued influence of Russia (and those too afraid to fight it) connected to the Pink Tank, to the turn toward national reverence questioned by “Horse.”  Now the target is the European Union and for better or worse, the joke is still funny.

First, Cerny’s “apology” is itself a work of art, a beautifully designed document designed to admit just enough to keep the conversation going.  It is delightfully multilayered including the final sentence:”the piece thus also lampoons the socially activist art that balances on  the verge between would-be controversial attacks on national character and undisturbing decoration of an official space.”  It is yet another beautiful irony that the presumed goal of the apology–keeping the artwork hanging–makes it yet another example of the kind of art that Entropa is supposed to be criticizing.

Second, it is amusing to me that a piece of art allegedly about national stereotypes plays directly to my own stereotypes.  When I think about what I love most about Czechs, I think about their penchant for subversive humor.  This is itself a stereotype, I think.  There’s no reason that Czechs are any more likely to do this kind of thing than those of any other national group.  At the same time Czechs do seem more likely to embrace this kind of humor as part of their national heritage than do other European countries.  In that sense, Cerny’s Entropa itself is just as much an example of stereotype as the alleged pieces in his artwork.

There are also lovely gems snuck into the artists’ biographies including: