There are new political parties everywhere. And they follow patterns. Tim Haughton and I have written about them here: Whither Eastern Europe_Political Party Systems_Deegan-Krause

Clear victory for Kiska.  Not much else to say at the moment.  Good analysis on STV so I turn it over to them.  Tomorrow I’ll try to look at shifts in support between the two elections to give us a sense of what this means for coalition patterns.

As in the past, it seems to be the new voters, those turned off by both major “sides” who seem to hold the key.  We have seen non-left/national governments only when there has been a new and quasi-independent force.  Schuster in 1999, Kiska now, SDK with SDL in 1998, SDKU with ANO in 2002, SDKU with SaS in 2010.  In 2012 the right was too damaged by the Gorilla scandals and infighting to take advantage of OLaNO) Whenever you have straight left against straight right without the middle, the different, the straight left/national seems to have the advantage: Smer in 2006, Gasparovic in 2010.  If it had been Fico v. Prochazka would we have seen the same spread? or even the same Fico loss?  Fewer voters would have turned out for the Prochazka (many Kiska voters would likely have stayed home) and more voters would have turned out for Fico, lest Prochazka win (in Fico v. Kiska election the loss wasn’t /that/ great).   Would that have covered a 19 point spread?  Somebody please invent a time machine or a portal to the multiverse so we can find out.

We’ll see tomorrow what the regional results look like.

Time for bed for Slovaks, but not for me.  I’m off to a play put on by my school district’s amazing music program.

Hard to see how Fico wins at this point: 59:41, with the lead increasing but at a declining rate.

Turnout looks like maybe 52?  Slightly lower than 2009 second round.

If this trend keeps up through 25% of precincts, it’s pretty clear.

The only thing to pay attention to at the earliest moments is that according to the minute-by-minute returns from the first round (thanks to Sme.sk–somebody has been paying attention to details–http://www.sme.sk/c/7137934/kto-su-volici-fica-kisku-a-prochazku-volebne-grafy.html–Fico’s results at the first five minute point slightly exceeded his final totals (30% to 28%).  Kiska’s were also higher but only slightly (25% to 24%), and those of the losing center-right candidates (Prochazka, Knazko) were slightly lower.  If Kiska picks up some of those right-wing voters, even half, his numbers should stay roughly the same over time, while Fico’s will likely follow the declining pattern.  If, therefore, Kiska is less than 1.5% behind in the first 5 minutes, he is the likely winner.

It is also notable, for those who care, that turnout was slightly lower at the smaller precincts that hand in their results early, so total turnout may end up higher than we see at first glance.

I don’t have a live stream from Slovak channels where I am so I’m obviously saying what others have said already: Fico and Kiska.

What I didn’t expect was the general strength of the others and the general weakness of Fico.  It’s going to be a very interesting two weeks because Kiska and Fico are separated by 4%, and together the candidates of anti-Fico parties (Prochazka, Hrusovsky, Knazko, Carnogursky, Bardos and Mezenska) have 45%.

It won’t be quite that simple since voters of some of the anti-Fico candidates above will stay home, and Fico will turnout more voters next time.  But the range of additional turnout may not be that great: this time the turnout was almost identical to last time (around 43.6%) and in last times competitive second round it only rose by 12 percentage points.  Of course some of the voters who support the current non-Fico losing candiates will stay home, but with these results the anti-Fico forces might also smell blood and turn out to humilate their opponent.    It’s not at all impossible for Fico, but this is going to be much harder, I think, than many expected.

The next two weeks will see a very big test of the Fico turnout machine and media machine.  It’s going to be a race between Smer-turnout and Smer-negative ads against Kiska on the one side and Kiska’s soft support plus the existing parties on the other.  The question for the former will be “can we get out enough of our loyalists and sufficiently tarnish our opponents.  The question for the latter will be “do we dislike Fico enough to work for Kiska?” on the other side.  Given the likely strength of the former and weakness of the latter, Kiska would /need/ to have a head start to have a fighting chance.  With these results, he does. 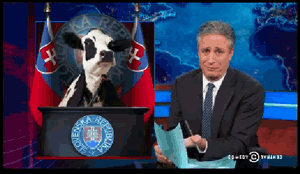 Last week Jon Stewart got in trouble for mocking media commentators who might say things like “Slovakia’s president is a cow”.  This week, we have the news that its next president might be the current prime minister.  For those who know Slovakia’s constitutional system, this is perhaps even /less/ likely: why would why a politician at the top of his game–at the top of the game in the region–choose an ostensibly ceremonial presidency over his current position as prime-minister and party leader in a strong majority government.  Yet people close to Fico have for years been saying that he’d rather be president, so many of them, in fact, that it was hard to doubt the rumors had something behind them even while it was hard to imagine that Fico would actually do it.  As a result, however, I’ve been thinking about this for awhile and have a few thoughts below about why Fico might do this and why we should care (ranked to some degree in order of ascending probability).

I. For Fico other concerns trump power (possible, though surprising).  There are at least two reasons Fico might be willing to sacrifice power by moving to the presidency

A. Blackmail (probability unclear, but I certainly hope not).  There are persistent but ill-supported rumors that some “they” (primarily corporate interests) have information that could destroy Fico’s career and that they use this leverage in ways that he feels are overly limiting and may make him willing to take a less powerful position just to escape the sword of Damocles.  I am not a fan of conspiracy theories but that may only be because the kind of work I do depends on more or less transparent political systems and this would suggest that Slovakia is not in that category.

B. Health issues (possible, oft repeated).  There are occasional rumors of panic attacks and during his first term Fico certainly was not a model of health (and had the kinds of health problems that often indicate incredibly high stress levels).  This term has seemed, at least from my distant view, to be a healther one for him.  During the previous term there were consistent claims that “Fico doesn’t like the day-to-day fighting of politics (even if he is good at it), and that the presidency offered him a position of relative ease that he would be willing to accept at the expense of his ability to shape Slovakia’s destiny.

II. Fico does not believe this entails a loss of power (entirely possible).  There are several possible reasons for this.

A.  (Rather unlikely) He plans to change the current formal institutions to increase the power of the presidency: Fico’s party does not have a constitutional majority, and so this seems unlikely at the moment, and if this has a negative effect on Fico’s party, then it may be unlikely for the forseeable future, but it is at least theoretically possible

B. (Somewhat more likely) He plans to use the current formal institutions in ways that increase the power of the presidency.  Fico may believe that he can play a central role even if he is no longer prime minister.  As Milos Zeman has demonstrated most recently in the Czech Republic, presidents can be powerful even in systems where they are formally weak.  There are at least two possible paths to this:

It’s also possible that there is some combination of these or others that I am not imagining.  If Fico imagines the presidency to be a slightly easier job without a huge decrease in power, then his choice is less inexplicable.  Of course he may be wrong on both counts, especially the latter.

III. Finally, what follow-on questions does this raise:

Whatever the case, Slovakia continues to fail to be boring.

A few thoughts continuing from yesterday:

First, in a post-election debate (the first I’ve ever seen and kudos to CTV for arranging it (it helps that polls close at 2 in the afternoon), the moderator asked various parties for their opinions about many things including coalition partners.  Here’s a list of the relevant answers:

This is like a hard SAT logic question and I need to draw it out, but if these statements are predictive (they may mean them now but leaders often change their minds on this kind of thing), then I think there is no actual answer for a majority government.  The best would be a minority government of CSSD-KDUCSL tolerated by ANO, though I suppose there is the mathematical possibility of a center-right government supported by ANO and Usvit.

A few numbers worth presenting (graphs to follow).  The first relates to various measures for determining the size of the Czech political party system.  By Czech standards this is a huge political party system.  And it is very evenly distributed (no single pole).  In fact the gap between the largest and smallest parties in parliament is a remarkably low 13.5%.

The second set relates to volatility–change in this election compared to the previous one.  Again, change this time is huge: 39%.  As huge as last time.   And it is evenly distributed between losses/gains among existing parties and entrants/exits of existing parties (about 19% each).

Finally a table on the use of the preference vote.  The last election in the Czech Republic saw an enormous increase in the use of votes for individual legislators (40 of 200 deputies elected on that basis if memory serves, an increase from 6 in the previous period).  This time it is not quite as high but it is still very big: 27 out of 200.  It is the parties with larger and more robust organizations that saw the biggest changes: ODS (also suffering from member rebellion), KDU-CSL  and KSCM (not suffering from member rebellion) and CSSD (whose voters don’t seem especially pleased with some of its elite).  Below these were the new and organizationally weak parties:  ANO (one of whose members was elevated beause he shared the name of the party founder), and TOP09, and Usvit (with exactly zero)

Almost all the votes are in and it’s a mess:

There is little way out of this.  With no parties above 25% of seats, there can be no coalitions with fewer than three parties.  This means that some of the big options are off the table, particularly CSSD-KSCM.  That was really the only chance for KSCM so despite their improvement by nearly 2%, they’re in just as bad a situation as before.  The problem is that all of the /other/ government options seem equally impossible at the moment.

I’ve spent the last 2 hours listening to interviews with every party leader on CTV (and I mean every, since the station has made the very odd decision of bringing the leaders of all tiny parties into the studio and interviewing them, mainly, it seems, with the goal of taking them to task) for insisting that they should participate in the debate) and what we see from that is:

Which pretty much rules out any majority government.