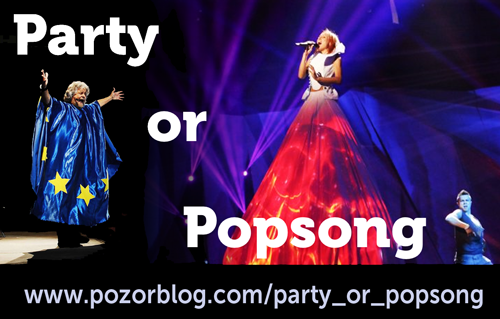 I am, I must admit, a latecomer to the Eurovision Song Contest, aving not I discovered until 2007 when I was forced into a head-on confrontation when it(or at least the outdoor portions of it )happened right next to the Joint Sessions of the European Consortium for Political Research. But once I saw it, I couldn’t quite look away, and it has become an annual fascination for me (and now for my entire family). Recently these two worlds collided again and I realized that the weird names of new parties would fit very nicely into the song contest–and vice versa. They are so similar, in fact, that I am dare the people of the internet to try to figure out which is which. And so in the spirit of the recent “IKEA or Death”, I’ve developed (with the enormous help of Graham Hukill in my university’s Office of Teaching and Learning) a little game called: Party or Popsong. Can you tell the difference?
http://www.pozorblog.com/party_or_popsong/.  So let the voting begin!

1 thought on Party or Popsong!