A third post on the Czech election. There is a lot to say. I will begin by not quite rejecting the strong temptation to direct criticism to Dnes for celebrating the record high number of women in the new Czech parliament by adorning the article with a drawing of a topless woman and then inviting its readers to vote for “Miss Parliament” based on electoral headshots (I feel compelled to include the link just to prove I’m not making this up, but please don’t go there). It is enough to say, perhaps, that this is sexist even by Central European standards .

Instead I will focus on the question of volatility. In yesterday’s post I plotted Czech volatility over time but did not have time to use the right methods or comparison set. Now that vacation is over, I can fill in the gaps.

First, I can provide references to the articles I cited: the two best recent works I know on volatility: 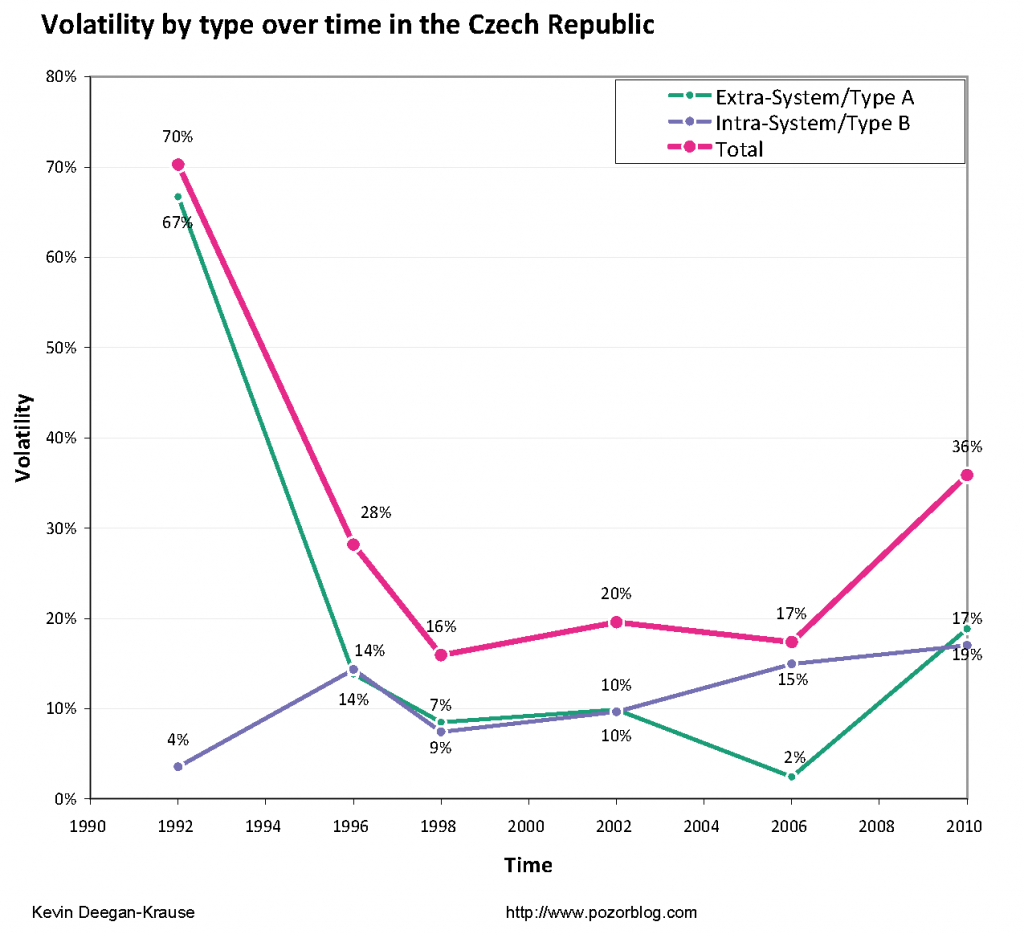 These levels are low not only with regard to the first electoral period but also with regard to the region as a whole. To convey that point, I steal figures from Powell and Tucker’s 2009 analysis, circle the Czech Republic, and insert the 2010 data. For comparison’s sake, I do the same for Hungary (and in two weeks will do the same for Slovakia). The results are as follows, with the Czech Republic in blue and Hungary in green. 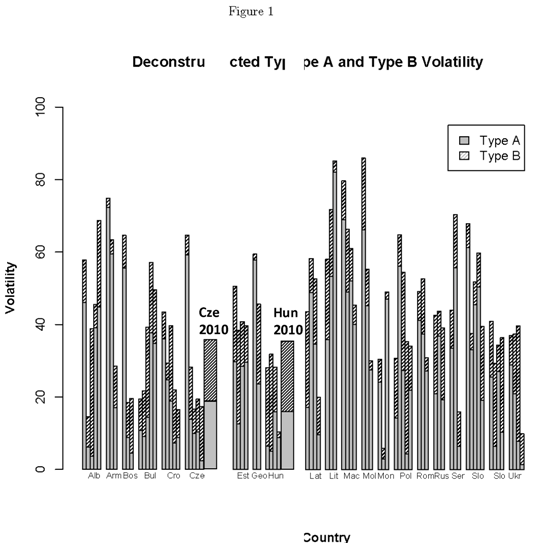 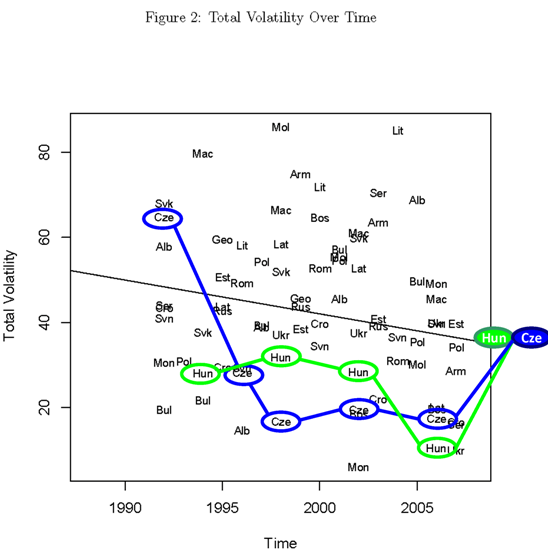 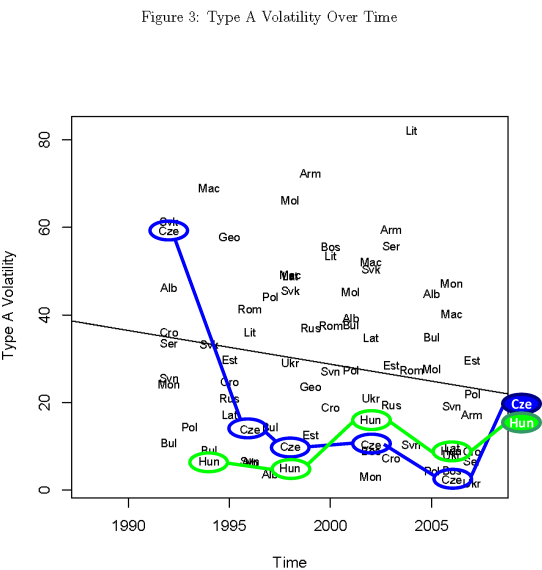 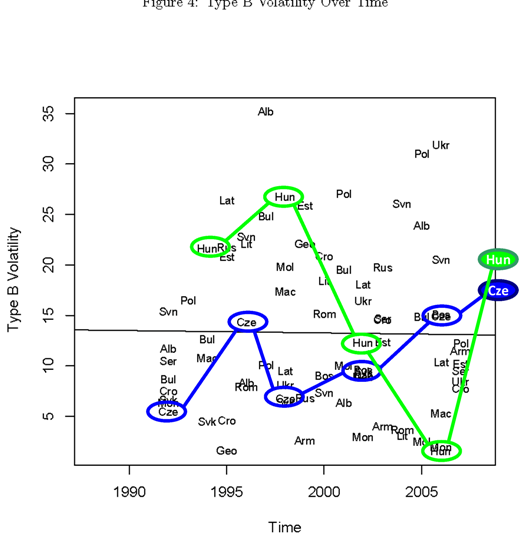 In addition to the quantitative resemblance, there are also other similarities.

Despite these similarities, it is important to emphasize that the election results in these two countries also differ in ways that are quite instructive:

What happens in Hungary and the Czech Republic as the result of these elections will not, I think, have much impact on the broader world (and may not even have much impact on the quality of the daily lives of Hungarians and Czechs) but they are worth this degree of close scrutiny (and more) because what is going on there is indicative, I think, of significant transformations in the relationship between who people are (demographically), what they think (attitudinally) and who they vote for (politically). Demographic patterns and attitudinal patterns still exist but their relationships to political behavior have changed as perceptions of corruption have risen to the top of the list of concerns (and “endurance” becomes shorthand for “corruption”) and as political entrepreneurs take advantage of this change and of new organizational technologies to provide an ever changing menu of new parties (themselves organized primarily for short term gains). For awhile the Czech Republic and Hungary offered some evidence that the trend was not inevitable. With the most recent elections in these countries, it is more difficult to see any alternative.

Finally, from the broader perspective it is interesting that in Hungary and the Czech Republic the election has been regarded as a fundamental shift, a major change in the game of politics despite the fact that the degree of shift was, by regional standards, only about average. Perhaps earthquakes only seem major if you are not used to them, but they still shake buildings. Of course people and institutions figure out ways to survive even where earthquakes are a regular occurance, but their lives are different than they would be in areas with less seismic activity (money is spent differently, personal habits follow different patterns). I hope to spend a good portion of the next few years thinking about how political life is different when every election is an earthquake.

Ben Stanley commented via Facebook: “It’s great being a CEE specialist. Instead of accumulating common wisdoms, we get to throw them all away and make up new ones!”

Cas Mudde comented via Facebook, “Would be interesting to see the same for seats in parliament.”
Here it is, though it is actually rather uninteresting compared to the same calculations with votes.  It suggests, however, that one of the reasons that new parties do not survive is that they never really get started.  US, VV and TOP09 are the only new parties actually to have made it over the threshold since 1992, but this rather technically excludes the Green Party, SZ whose 2006 incarnation is difficult not to describe as a new party despite a certain degree of legal and organizational continuity with the one established shortly after the revolution of 1989.  It will also be interesting to see if, as Sean Hanley wonders, Suverenita manages to use its stronger-than-expected performance to chip away at CSSD in the next election cycle, thus enhancing (or if VV or TOP09 fare badly, maintaining) the red “2010” bar. 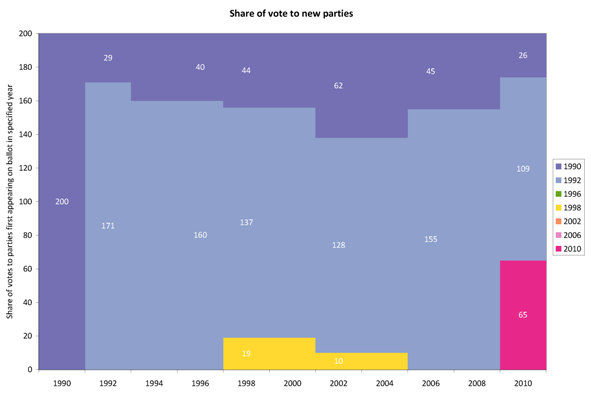 I’ve recently prepared some thoughts on foreign policy of populist and extremist parties in postcommunist Europe and have uploaded an annotated presentation–see Populist foreign policy annotated.ppt or Populist foreign policy annotated.pdf–for those who are interested. It contains some thoughts on definitions of extremism and populism, makes reference to the excellent expert surveys by Hooghe and Marks et al and suggests that the two most important dynamics in assessing extremists foreign policy involve the tension between foreign and domestic policy (with domestic political needs usually prevailing) and the tension between extremist parties and their proximate “non-extreme” neighbors (and the more v. less extreme factions within those non-extreme parties).  An excerpt below:

When thinking about the broader patterns and how policy-makers should approach these, it is important to note that there are two important dynamics, areas of competition whose outcome has a critical impact on party positions and government policy. The first dynamic is the give and take between foreign and domestic policy arenas. While it may sometimes be the case that foreign-policy issues are highly salient and come first in the public mind, the evidence here and elsewhere (see Liang, Europe for the Europeans) that it is domestic policy questions—and quite often the quest for electoral advantage—that drives foreign policy positions. It is notable, however that extremism and populism have distinct patterns in this regard. In cases of purely extremism, the desire to exclude is often a genuine party goal, and parties may take foreign policy positions to reward those who dislike the same enemies or punish those who champion those enemies (as in the case of extremists increasing their opposition to the United States in response to US recognition of Kosovo, regarded as hurtful to Serbs and metaphorically as hurtful to those countries with large, regionally settled minority groups (Slovakia, Romania)

The populist dynamic can be the same as the extremist dynamic, though the populists may be more likely to employing the extremist cause for the sake of votes rather than out of genuine (this is an assumption and therefore likely to prove wrong on further investigation). The populist dynamic may also have another aspect, however that is relatively unique to populism: since populist parties (by the definition I have used) depend on attacks on a corrupt elite, they face difficulties once in power since they become elites themselves. Rather than seek alternative bases of support, the populist parties may seek instead to look for other “elites” above themselves toward whom they can allege corruption and against whom they can campaign. This may cause them to turn their attacks to major powers and supra-national organizations (the US, the EU) so that they can say, “yes we were elected, but now we’re fighting the real corrupt elite: them”

There is a second key dynamic at play here: the dance between extremists and those closest to the extremists on the “non-exclusionary” side of the boundary (a boundary whose location varies depending on the perspective of the observer and the context). The extremist parties themselves are rarely strong enough to shape policy directly, but they can do so in coalition or through their influence on vote-sensitive “flirt” parties. Parties such as Slovakia’s Smer and Poland’s PiS have demonstrated a willingness to enter into coalitions with parties with similar but more extreme positions on “exclusion” issues. The question, of course, is in which direction the influence runs, whether it is the extremist parties that shape the more moderate (but often much larger variant) or the other way around. Extremist parties can also shift the positions of moderate counterparts by forcing such parties into more extreme positions to avoid the loss of voters to the extremes, but only if they think they can do so without losing centrist voters. More work on such dynamics can be found in Przeworski and Sprague’s Paper Stones (1986) among many others).

Of course the interaction between extremists and moderates may also occur within individual parties and indeed most of the “flirt” parties and larger non-extremist populists have internal factions that represent a range of opinions from those near (or as extreme as) the extremist parties to those who hold rather moderate views on the same questions. The resulting policy positions depend on the complex interplay of coalition partners, intra-party organization and decision-making and voter preference. These are obviously highly contextual and so deciphering (much less predicting) these developments in particularly countries requires considerable local knowledge, even as broader, big-N research can help to identify relevant variables.