One extremely belated note on Slovakia’s elections.  I was delighted in 2015 when my colleague and co-author Tim Haughton snapped this picture of a pre-pre-pre-election poster for the Slovak Civic Coalition SK-OK (Slovakia OK and also in acronym terms “JU-MP” or “LE-AP”):

Aside from the clever name pun, the interesting color scheme, the solid font, I was surprised to see the triumph of the hipster iconography in Slovakia’s politics: tablets, bikes, hats, beards, big round glasses.  (I shouldn’t be surprised in the current international media environment that there is an almost universal visual dictionary of hip, but it saddens me slightly to find it everywhere without much local or regional variation).  The most fascinating touch of all, however, is the flying car.  For years I’ve been a constant follower of Matt Novak’s Paleofuture blog (http://paleofuture.gizmodo.com/) and I’ve appreciated his sardonic take on each announcement that flying cars were just around the corner.  But I did not expect his blog to intersect so directly with my own.

In retrospect, I probably should not have been surprised.  The flying car has the same “I’m in on the joke” feel as the handlebar mustache and the panama hat.  It captures the “what’s old is new again, only now with more irony” aesthetic, and maybe even goes one further, since it refers to something that is not only very much “back then” but was then regarded as something to be expected around now, so there’s a kind of triple reflection: an unfulfilled present looking back with fondness at the sweet naïveté of somebody looking forward to something that would never come.  So flying cars are hip and can be a signal to voters that parties are hip to their hipness.  (As Novak points out, John Kasich in the US has also used the theme, though without a lot of conscious thought: http://paleofuture.gizmodo.com/john-kasich-is-the-only-candidate-bold-enough-to-promis-1764651805)

The other reason I should probably not be surprised to see this overlap is that one of the most visible contenders in the “flying car that nobody actually seems to want or need” race is the Slovak firm Aeromobil (http://www.aeromobil.com/) which has been testing an impressive looking product (pictured here in front of that other symbol of a mostly lost future, Mochovice nuclear power plant): 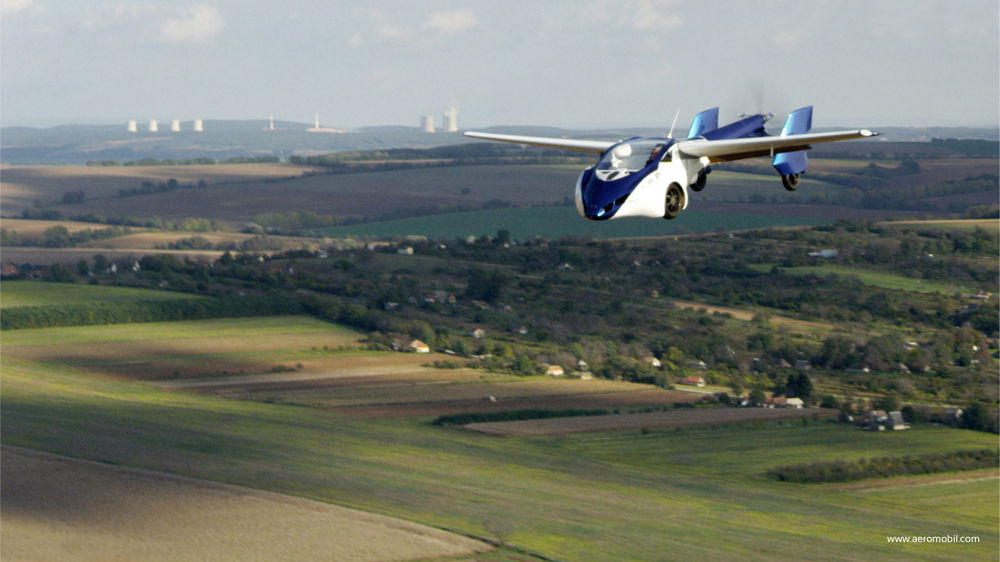 SKOK’s flying car image was always a bit of a risk.  AeroMobil 3.0 crashed on a test flight in May of 2015 (though thanks to the car parachute, the inventor surivived to continue his efforts).  SKOK, the party, had no parachute.  Despite a few polls that showed it at least potentially viable (MVK consistently put it around 3%, though other polling firms showed it closer to 1%), the party did not even manage to jump the one percent threshold, in the 2016 election, it’s 22,000 votes accounting for only 0.84% of those voting.   I haven’t yet seen polls that would tell me for sure, but it may be that the hipster vote went not to the flying car but to the guy with the carefully knotted scarf and red glasses and the ever so slightly ironic (given his own family history) name “We Are Family” (Sme Rodnia): Boris Kollar (seen here either flashing the victory symbol or putting something in quotes”) 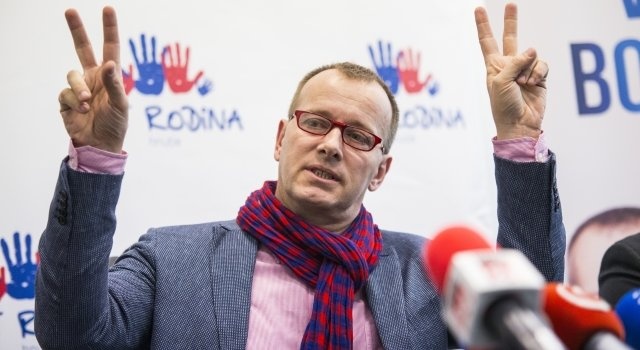 And then the question is whether, having gotten off the ground, SME Rodina stays up (like Smer-SD and, more recently, SAS and OLaNO) or follows the trajectory of previous new parties ZRS, ANO, and soon-to-be former-new party SIET).