A brief interlude of beauty and sorrow, courtesy of Fulbrighter Kimberly Zarecor. 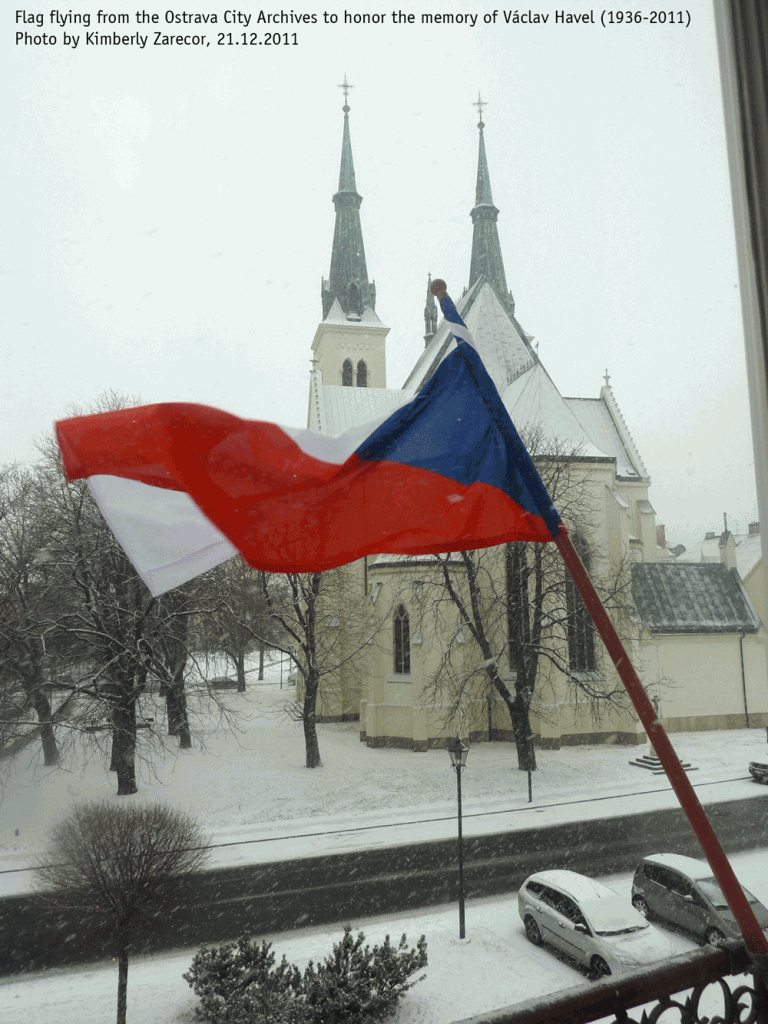 The most surprising thing about this, however, is not its characterization of the EU stabilization (benefiting Greece, and Spain and Portugal and Italy) as the work of the devil.  That’s pretty normal for Slovakia’s politics (and particularly so for SNS).

Equally unsurprising, but rather more unsettling, is the depiction of a Santa wearing a political armband, and not just any red armband, but one that includes an eagle clutching a round symbol with clear straight lines set against a deep red background.

Slightly more surprising is the demon’s choice to wear fashion with designer labels not only by the current government parties SDKU, KDH and Most-Hid, but also SNS’s recent (and, from its perspective only potential future) coalition partner, Smer.  Of course Smer joined with the others in supporting the Euro stabilization, but this may be a sign that SNS will (like SaS on the other side) make strong use of the Euro question in its campaign.  The question is whether in trying to pull voters back from Smer, it also pushes Smer to the other side, though this may not be that big a risk since Smer has shown itself inclined to pick the weakest coalition partner, and it is hard to imagine that not being SNS (assuming it crosses the 5% threshold).

But the surprises don’t end there.  I had a nagging feeling about this that was confirmed by Martin Votruba of the University of Pittsburgh.  Martin writes:

The telling thing … is that SNS [despite its nativist approach] is dragging in an alienimage for Christmas, [using the traditional American icon of Santa Claus instead of the] traditional depiction of Jezisko (Baby Jesus) who brings presents.

[Furthermore,] images like the one on the SNS billboard were first imported from the Soviet Union as Dedo Mraz (Grandfather Frost) to replace Jezisko and imposed on people, with no success except in public St. Nicholas and Christmas events, and now by advertisers as Santa.

Many don’t care, of course, but there’s been a good deal of internet comments in the past on advertising that uses Santa Claus, in which people ridiculed ad statements like “Santa Claus will bring you…” [and noted that] that the manufacturers/advertisers clearly don’t have a clue that presents in Slovakia are brought by Jezisko.

This “alien” image brought in to represent the Slovak National Party is very much like when HZDS in its nationalist fervor put up billboards in the 1990s with images of “Slovakia” where the pastoral landscape in front of the the highly symbolic Tatras mountains turned out to be a stock picture of the Swiss countryside.

I am personally glad to see this usage by SNS as it helps to reinforce a point raised by a colleague of mine during Detroit’s Noel Night celebration as we passed an “Occupy Detroit” activist dressed in a Santa suit.  He noted the interesting juxtaposition between Santa’s apparently left-wing socio-economic ideology (giving stuff away for free) and his rather right-wing cultural predispositions: demanding to know who is naughty or nice, engaging in surveillance about whether children are awake or asleep.  This insight actually helps me solve a teaching problem that has been troubling me for a long time.  When I teach American politics (or indeed the politics of almost any country), I try to point out that political competition may be multi-dimensional, and that in many countries there is a disconnect between the economic and the cultural.  I often have students take online tests like, The Political Compass or Idealog which print out their results on 2-dimensional charts like this one.

One of the problems with this, however, is that of the empty quadrant: America’s two major political parties occupy the lower left and upper right, and students can see that the Libertarian party occupies the lower left, but who’s the opposite of the libertarian?  Who in the United States believes in widespread distribution of selective benefits while at the same time demanding strict adherence to cultural norms?  Pat Buchanan?  Maybe, sometimes.  The real answer, clearly, is Santa.

Postscript.  Santa’s hot these days.  If you don’t like the SNS ad or my own infographic, try this one.

I know no better way to mourn the death Vaclav Havel to remember the congratulations on his birth that friends snuck past censors back in 1989.  Then they wished him health and continued success.  Now I thank him for that success–success I not in his fame or political success but in his constant attempt to live honestly and responsibly, whether as prisoner or president–and I extend to him my vague hope that effort to live in truth somehow endures after death.

“On the day 5 October 1989 Ferdinand Vanek of Maly Hrad celebrated his birthday.  Thanks to him for the hard work which he has done in in his life and continues to do, and his friends and co-workers wish him many more years of health and further success in his work.”

Thanks to my student Daniela Brabcova from Plzen who knew enough about Havel to spot this gem when it came out, kept a copy and shared it with me in the spring of 1991. More here: http://www.pozorblog.com/2009/10/it-was-twenty-years-ago-today-or-the-audacity-of-hoax-prequel/.