It is absolutely delightful for me to see that after years of publishing one poll after another without much analysis and presenting each difference as “news”, two major papers in Slovakia have begun to present long-term time-series data of polls.  I suspect they will still present each new poll as “news” (though congratulations to them also for doing much more comparison and acknowledgment) but now readers can at least do some comparing on their own.  A few brief thoughts on the two attempts

All of this means that I’m not yet ready to leave the dashboard business, but the great news is that the average consumer of news in Slovakia now has a relatively easy method for assessing the meaning of claims about polls and that is fantastic.  It also means that Slovaks, for the moment at least, have pulled ahead of their Czech neighbors who also have an election coming up and whose Lidove Noviny publishes what was, until Sme, the best graphical analysis: http://www.lidovky.cz/ln-volby-ps10.asp?v=preference.  The graphics here are better and more readable than Sme’s but they lack the comparative polling elements (and therefore the implicit “trendfinder” capability) that Sme has introduced.  Perhaps it is time for me to get into the Czech dashboard business as well.  Until the papers catch up again.

Douglas Muir at A Fistful of Euros has interesting things to say about a Radio Free Europe report that “Azerbaijani Authorities Interrogate Music Fan Over Eurovision Vote For Armenia” So maybe my unhealthy interest in Eurovision isn’t completely irrevant.  (Update: even the New York Times finds this interesting: http://www.nytimes.com/2009/08/31/arts/television/31iht-eurovision.html?_r=1)

In any case, it is an odd coincidence that an article about this particular interest should come to me on the same day (I’m a bit behind in reading my RSS feeds) that my inclination toward graphic design blogs led me toVisual Complexity’s article about Baris Gumustas’ visualization tool for Eurovision voting.  The static images are quite striking but the animated visualization is even more remarkable, far more beautiful than the show itself: 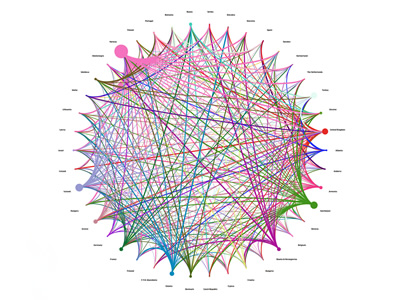