Only three days to go and we have now the final allowed-by-law pre-election poll numbers in (the big three of CVVM, STEM and Factum-Invenio; SANEP and Median did not report, but this is probably all right since I am not yet certain how to think about SANEP and I am certain that Median has significant problems).  And the result is…. 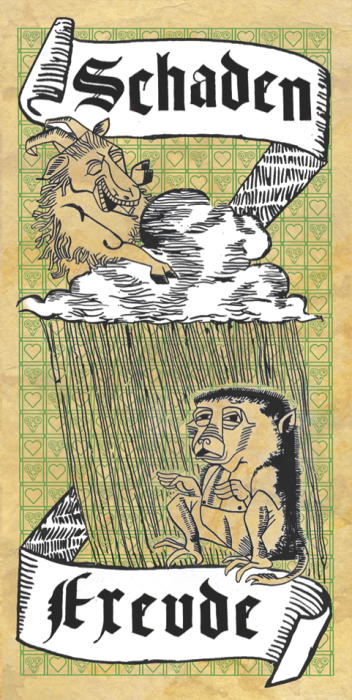 I have been reporting for a very long time about the insufficiencies of Slovakia’s reporting on public opinion polls, particularly the tendency to treat each new poll as an utterly independent news item without any regard for previous polls by the same firm or contemporary polls by other firms.  As somebody who has frequently championed equality of status between Slovakia and the Czech Republic, I am happy to report the otherwise sad news that Czech reporters are just as limited as their Slovak counterparts. Dnes reports “Left has lost its majority, ODS strengthened” but ODS improved by a mere 1.2% (well within any margin of error for such a poll, though of course the story did not mention any margin of error) and by my estimation of seats, the left has not had a majority in the Factum poll since February, so it’s only in comparison to other polls that the left lost ground.  But of course that’s not the right comparison to make. To be fair a better Dnes article published twelve hours later interviews the directors of the three major firms and uses their responses to compare the major polls, how they ask questions and why they differ.  It also does a good job of looking at the consequences of the elections.  But this is not an excuse, I think, for bad reporting of the results on the fly.  It does not take a conversation with Kunstat, Hartl and Herzmann to have a sense of why polls differ or why an article should not report on more recent polls as if they are more accurate polls.

At the top, CSSD produces two quite different sets of numbers–CVVM and STEM put it around 31% while Factum puts it at 26%–while ODS produces an equally large but more evenly distributed range of responses: Factum puts it a 23%, STEM at 21% and CVVM at 19%.  In percentage terms these differences are not much bigger than those for VV or TOP, but in actual terms these differences are large enough to be crucial for determining the composition of the next government.  At the bottom of the spectrum there is a small difference in the results for KDU-CSL–3.5 in CVVM, 4.5 in STEM and 5.5 in Factum–but a difference with extremely significant results.  Not only does this difference of 2 percentage points represent about 50% of KDU’s average result, but it also means the difference between life and death for the party and perhaps for the coalition.

Given the significance of these two sets of numbers–they Are responsible for the difference between the “Left has majority” and “Left lost majority” headlines–it is time to do what the Czech daily press simply has not done (if any magazines or blogs have done it, I would like very much to hear about them), which is to examine the underlying math.  To do this is more complicated than I would like. 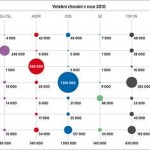 Unlike Slovakia, where a single district makes calculation of seats from votes a simple exercise (which Markiza still managed to get wrong in 2006), the Czech Republic’s combination of many, differently sized districts and parties with varied regional strengths makes a quick estimation impossible.  The best data, of course, would be a fairly significant sample size within each region, but since I don’t have that (and neither do most pollsters) or even a too-small sample size in each region, I am forced to rely on the large but dated data source of the last election.  If parties’ regional strengths are consistent over time (and Kostolecky’s work suggests that they are), then we can guess what overall numbers mean for particular regions and calculate seat results on that basis.  Of course we don’t have historical data for new parties and so I have made a guess that VV will have the same regional strengths and weaknesses as the Czech Greens in 2006 and that TOP09’s regional distribution will be an equal mix of ODS and KDU-CSL.  Those aren’t great guesses but they do at least correspond to the ebb and flow charts a recent Dnes article (see right).  I have no idea if this will work.  We will see in a few days when I can plug in the electoral numbers and see if the 2006 regional distributions predicted those of 2010.

That done,  we can then test various other assumptions, namely the relative performance of CSSD and ODS and whether KDU-CSL makes it over the threshold.  The outcome is not unexpected but it is useful to take a look at the data which I present here in two formats:  a color table and (because I can and have always wanted to) in a piece of (hard to read and pointlessly flashy) topography. 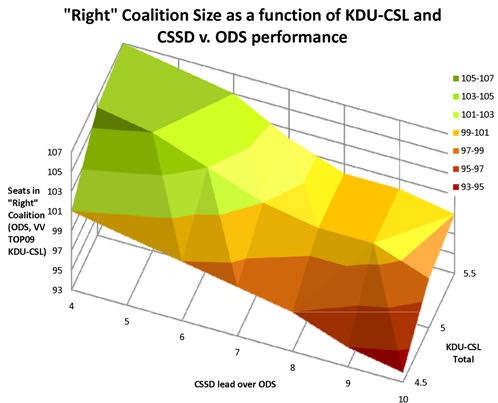 The simple take on this is that if KDU-CSL and ODS do well, there’s a strong possibility of a right wing government with a slight majority; if they do not do well, then they won’t be able to form a government and we’ll be in some odd realm of CSSD-led government where they key will be whether KSCM provides the (silent) supporting votes or one or more of the new parties fills that role.

More interesting are the other combinations: ODS does well but not KDU; KDU does well but not ODS.  In the first case, it would appear that KDU in parliament is equal to a three point swing between CSSD and ODS.  In other words, KDU brings as many seats as would a shift in the CSSD:ODS ratio from 29:21 to 27.5:23.5 (from a 7 point gap to a 4 point gap, which is about the same as the difference between Factum and STEM).  As the experts relate in the aforementioned Dnes article, if KDU falls short, then a majority right wing government will require ODS to outperform all but the most favorable polls vis-a-vis CSSD and for TOP09 and VV to maintain their current levels.  If KDU succeeds, then a narrow majority government becomes possible even with the ODS-negative results offered by STEM and CVVM.

Perhaps most remarkable result here is the renewed chance of deadlock of both CSSD and KDU do well: the amber “plain of indecision” on the graph above.  It is remarkable that in the middle of the Czech Republic’s greatest period of volatility since 1992, one marked by the emergence of two new parties and the probable death of at least one other, the outcome in the middle of the possibility graphs is yet another 50-50 split, yet more deadlock.