With about 1/3 of the vote in, the Czech Election is shaping up to be rather shocking, notably in the degree to which new parties outperform original polls.  I’ve been following and recording results every 5 minutes and what I get is the following graph.  The key point is that these results are /extremely/ stable from minute to minute.  Things do tend to change in the last 20% as big precincts from urban areas come in, but my experience with Slovakia is that they don’t change more than a fraction (I haven’t done this minute-by-minute in the Czech Republic before)

CSSD looks stuck around 22, KSCM is on a steady decline. 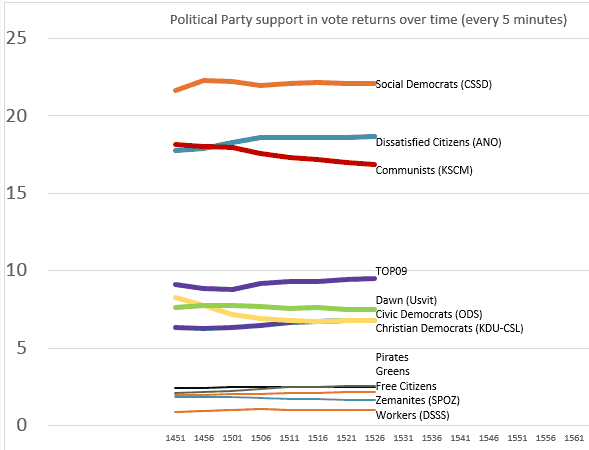 Of course votes aren’t seats, but CT has [translated this (how, I’m not sure) into seats and says that the results produce a parliament with 55 for CSSD and 46 for KSCM.  But if KSCM’s current trend continues and if affects distribution of seats in the regions, as it might–and if TOP09 continues its rise, this could produce yet another 100 v. 100 parliament or even a slight majority for the non-CSSD-KSCM.  It may also produce the potential for a CSSD-ANO 2 party coalition but it is not clear whether that would be politically possible.  More soon.  (By the way, trends have continued while I was writing htis.  No reversals in TOP09 or KSCM)