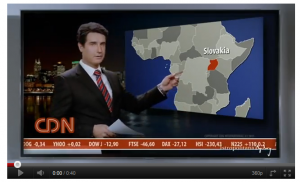 The people of Slovakia are so accustomed to being ignored or misidentified that they have made it a source of national pride (as the a recent Slovak beer ad attests), but suddenly Slovakia is on the cover of every newspaper in Europe (and even in the United States) because it alone of the 17 Euro members has voted against the enlargement of the capital guarantee of the European Financial Stability Facility (EFSF). If Slovakia’s “no” vote had been the result of overwhelming anti-Europe or anti-Euro sentiment, the matter now would be settled and the other sixteen countries would need to look for some alternative mechanism (as, indeed, they are apparently already doing just in case). But Slovakia’s “no” has much more to do with internal political posturing and if we want to understand what happened and what comes next, it is useful to understand how the relationships among political parties and their incentive structures that produced the 11 Oct. vote and how those may change in the immediate future. It is also interesting (for some of us) to think about what comes next for Slovakia (while those whose main interest is the Euro can once again relegate Slovakia to geographical indeterminacy).  What follows are various answers to the question

Two key parties in Slovakia failed to support the EFSF expansion in the hope of domestic political gain, but now that the government has fallen it is highly likely one of those parties will shift its position and help pass the ESFS on the next round, though when this will happen depends on its intransigence in demanding concessions.

What the probable no-then-yes will mean for the Eurozone and the Euro, I am not qualified to judge.  What the fall of the government will mean for Slovakia remains highly uncertain but is worth some consideration.

Three parties of the current coalition supported the ESFS expansion but needed one more to gain a majority.  The two other parties in parliament with enough votes (there are some others but they did not have enough votes or clout to play a role) refused to support the expansion, though for quite different reasons:

Of the two, it is SaS that now has the least options.  The party has voted against government partners on perhaps the most prominent piece of legislation in Slovakia of this decade and has done so even when the vote has been tied to confidence in the government itself.  Even if it could restore its short-term relationship with its coalition partners, it could now do so only at the cost of an unseemly and inexplicable reversal.  It has, in effect, played its only card in this particular game, and having demonstrated its position very publicly and blocked the expansion vote, it has very little left to say or do on this particular issue.

Attention now must shift to Smer, which played a quite explicit waiting game during the coalition negotiations.  Party chair Robert Fico has noted the need for the EFSF expansion and the consequences of its failure but also argued that it was the responsibility of the government–and the government alone–to muster sufficient yes votes.  Now that the government has failed to do so, and has in the process lost a vote of confidence, Smer is in a position to shift its non-support (never outright opposition) to support.  It has announced that it is willing to accept coalition proposals and coalition members are (even as I write this) meeting with Smer leaders.  The question will be the kind and degree of concessions it will demand.  Here the relative positions of the two sides is unclear.  On the one hand the EFSF package will not pass without Smer, but on the other hand Smer can no longer attribute its failure to pass to the insufficiency of the government, since the government is now merely a caretaker.  Smer, having done fairly well in the polls recently, has an interest in early elections, and it may be that this is the price of its support, and it is not clear if the until-recently-governing parties have many alternatives, though they will probably not give in without some other concessions in return.

The next EFSF vote is therefore likely to be a “Yes” and life in European and world financial markets can go on as before until the next crisis, one that will almost certainly not concern Slovakia.

As for things that do Slovakia, I’ll try to tackle that in the next post.