he New York Times broke tradition yesterday and published an article about Slovakia without a picture of a horse and cart:

What the Times article doesn’t say is that the ad begins with another national critique, that is in some ways even more pointed:

Not knowing where Slovakia is?
That’s American. 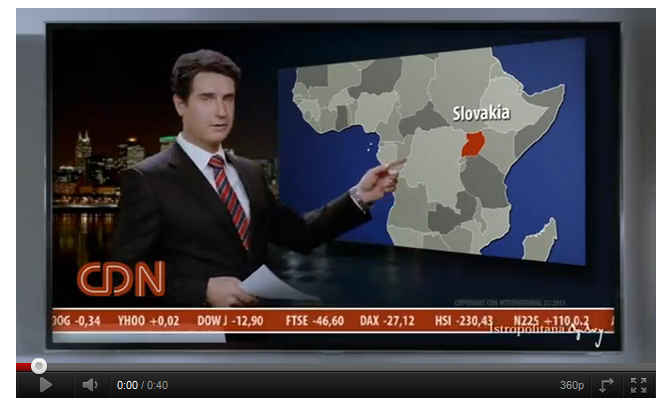 I have to give the ad producers credit for giving the actor great news anchor hair, and it is hard to take issue with the critique given the record of major American news outlets.  A few examples (click to enlarge):

Fortunately for my tender national sentiments, Americans are not the only ones to come under fire.  Czechs get it too:

Nearly everybody else gets it as well:

Germans come off as organized but uptight and French cuisine is odd and skimpy while Slovaks have big appetites for unhealthy food and can find things even on a messy desk.  What is most interesting to me here is the notion of Slovak self-identity that is portrayed here: disorganized and sloppy but clever and generous.  It’s actually interesting that this is not all that different from Czech self-identity in the face of the Austrians in The Good Soldier Svejk.
And speaking of beer-related identity discussions, it is notable how much the Bazant ad has in common with its counterpart the “I am Canadian” ad produced by Molson a decade ago, which likewise pokes fun at the arrogance of larger countries while expressing a bit of (self-deprecatory) hometown pride.  Do other countries produce similarly national beer ads?  Do tell.