I have been traveling and working on other projects and so have not had time to post a coherent post-election review, and I may not have time to do that until tomorrow, so in the meantime I will attach here a record of interview I did with the ever-capable Michaela Stankova of the Slovak Spectator.  Sitting here in Detroit writing about Slovakia, I think that I am more properly called a spectator than she,  but here are my answers to her excellent questions:

What were the most surprising moments for you in the election results? Was there anything completely unexpected?

I did not expect how inaccurate the final week of polling numbers, and I was especially surprised by the difference between the exit polls and the final results: 6-7% difference between polls and reality for Smer is quite shocking.  Even exit polls are usually are not particularly good at predicting final results, but for both FOCUS and MVK to be so far off and in the same direction suggests a need to rethink polling and especially exit-polling methods, something that has occurred in a variety of countries including my own.  Fortunately, this particular surprising had little consequence except for those prone to extremes of euphoria or melancholy and by 02:00 we could more or less predict the actual composition of the next coalition.  As for the results themselves, I the only real surprise was in the relative percentages obtained by Most-Hid and MKP-SMK, but since I figured that I had no way of knowing how those would come out, there is no result that would not have surprised me in one way or another.

Beyond the election results themselves, the final days of the campaign produced some remarkable moments:  HZDS giving out flour as an election enticement; Fico so concerned about a minor competitor as to brandish a “Don’t vote SDL” sticker; the moment of 00:42 on election night when the updated election returns put HZDS below 5.0 for the first time ever in its history; and my sudden realization around 02:00 that Slovakia would have its first female prime minister, news which my 6-year old daughter greeted with great enthusiasm.

The election turnout was expected to be very low, about 50 percent, yet the actual number hits 59 percent. What’s the reason for this unexpected interest of voters in the elections, in your opinion?

Well the problem is in the expectations rather than the interest.  In my research for our last interview, I found that voting intentions were not running behind 2006 and that in other elections there had been a slight uptick in turnout from the mid-2000s to the late-2000s and so there was few grounds for expecting a sharp decline.  I think that a small share of turnout increase may be related to the emergence of several new parties which perhaps offered some motivation for turning out:  SaS, Most-Hid and SDL between them attracted more than 20% of the vote; it is not to big a stretch to think that without plausible new parties (a condition that prevailed in 2006) some of these voters might have stayed home.

The election results of HZDS has encouraged political analysts and opposition politicians to talk about the ‘end of the Meciar era’. What does the fact that they were left outside the parliament mean for the party’s future?

The day after the 2006 election I plotted out trendlines for the various parties’ parliamentary delegations and found that the trendline for HZDS pointed precisely at 0 in 2010.  I turned this into provocative graph for my blog, but Inever ever expected it to be accurate.  Until about two months ago I figured the party would have enough reserve strength to scrape over the barrier. 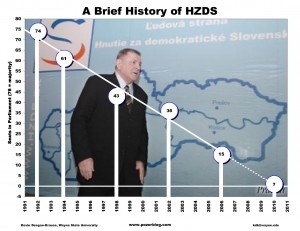 Now that HZDS is out of parliament, it will be even harder to reverse that trend (though I don’t expect it to achieve -15 seats predicted by the trendline for 2014).  Three forces work strongly against HZDS in the coming four years: history, demographics, organization.

What is behind the very high result of Smer? Why, on the other hand, did the support for SNS drop?

Let me discuss these in reverse order.  For SNS the results were actually highly consistent with the polls (with the occasional exception of FOCUS and the constant exception of the consistently-errant surveys by Median) which showed a long-term drop toward 5%, motivated I suspect (though I can’t at the moment prove) by the party’s ever-lengthening list of scandal and outrageous remarks.  The question on many minds, I’m sure, is “Why didn’t the affairs surrounding the new Hungarian government” cause its preferences to increase.  I cannot be sure without looking into post-election polling numbers, but the answer may be that these simply did not resonate with voters in the way that they resonated in the media.  Corruption appears to be more tangible and distasteful than statements from Budapest which do not have any clear personal impact for most voters.  The other question is “where did the SNS voters go?”  Here the evidence suggests that as many as 1% of them went to Nase Slovensko, with its even more radical solutions, and that nearly all of the rest either left the electorate or went to Smer.  Voter choice is always relative, and for a voter with a national orientation who nevertheless dislikes Slota or the corruption of his party, Smer is the next best national alternative and less touched by scandal.  This, however, raises the further question of “where did the Smer voters go?”

From one perspective, Smer’s results are “high” only by the standards of the final week of polls, which we now know to be (for reasons unknown) in sharp error.  Leaving aside the final week drop (and the polls of the final week proved in both 2006 and 2010 to make worse predictions than those from a month before) Smer lost more than 10 percentage points from its peaks during 2008.  A variety of experts including Martin Slosiarik at Smer argued at the time that many of these were “soft” supporters who chose Smer as the default option which was in government during a period of economic growth.  The work of Andrew Roberts and others shows that incumbent parties in Central Europe do tend to lose support during periods of economic decline, and many of those softer supporters appear have been affected by increasing unemployment and scandals involving those close to Smer.  Where did they go?  Some simply did not vote, others voted for SDL or KSS (though together not many more than voted for KSS in 2006) and a significant number of the remainder appear (at least in pre-election surveys) to have opted for SaS.  From a purely left-right ideological standpoint this shift seems unlikely, but if voter choice is relative and often non-ideological, then those who simply seek economic opportunity (without having a firm idea of how it should be brought about) and/or seek a cleaner alternative (the role that Smer itself played in 2002 and 2006) then SaS may be a reasonable choice.  (More on this using pre-election data here: http://www.pozorblog.com/2010/06/who-from-whom-slovakia-electoral-shift-roundup/).

Having said all that, I need to point out that Smer not only got the most votes in the election by more than a 2:1 margin but also that it increased its vote share by a sold 5 percentage points over the previous election (and its number of votes by an even greater margin) despite the fact that new parties in government usually lose significant support or collapse completely.  From an electoral perspective, Smer clearly did many things right: it stayed away from the worst of the corruption scandals (perhaps by putting the “ministries of corruption” in the hands of its coalition partners), it took a relatively popular national position without taking it to extremes (though it started to move in that direction in the last year), and it continued to criticize the wealthy and promote redistributive policies (even if many of those were more symbolic than economic).  My question is what happens to Smer now.  It has always been a party that seeks opponents and it will find this easier to do from opposition, but it will face at least three big challenges:

How do you evaluate the results of the two parties representing the Hungarian minority? Were the results surprising for you?

This one has always been opaque to me, in part because I cannot not read the Hungarian press and because what I read in the Slovak press does not even allow me to pretend to know what is going on in the Hungarian community, and there were no precedents that would have allowed me to build a rough model based on past election data.  In principle I found it highly unlikely that the Hungarian parties would maintain the 55:45 split they needed to both stay viable, but the polls pointed consistently at their near equality.  If we discount OKS, whose preference votes accounted for almost 10% of all Most-Hid’s preference votes, the actual ratio of Most-Hid to MKP-SMK among Hungarians was probably about 7.2 to 4.4, so the final ratio was just a bit above 60:40.  It may be that Bugar’s geniality and moderation were more of an electoral motivator than Csaky’s better organizaiton, but for a better understanding of why 20% more Hungarians favored Bugar’s new party than Csaky’s more established one, I look forward to a thorough and demographically-grounded analysis from Hungarian-speaking experts.

8 thoughts on Post-Game Show 2010: Interview with the Spectator