I’ve used up another 15 seconds of fame, this time in the Monday, September 29, Vitebski Kurier: 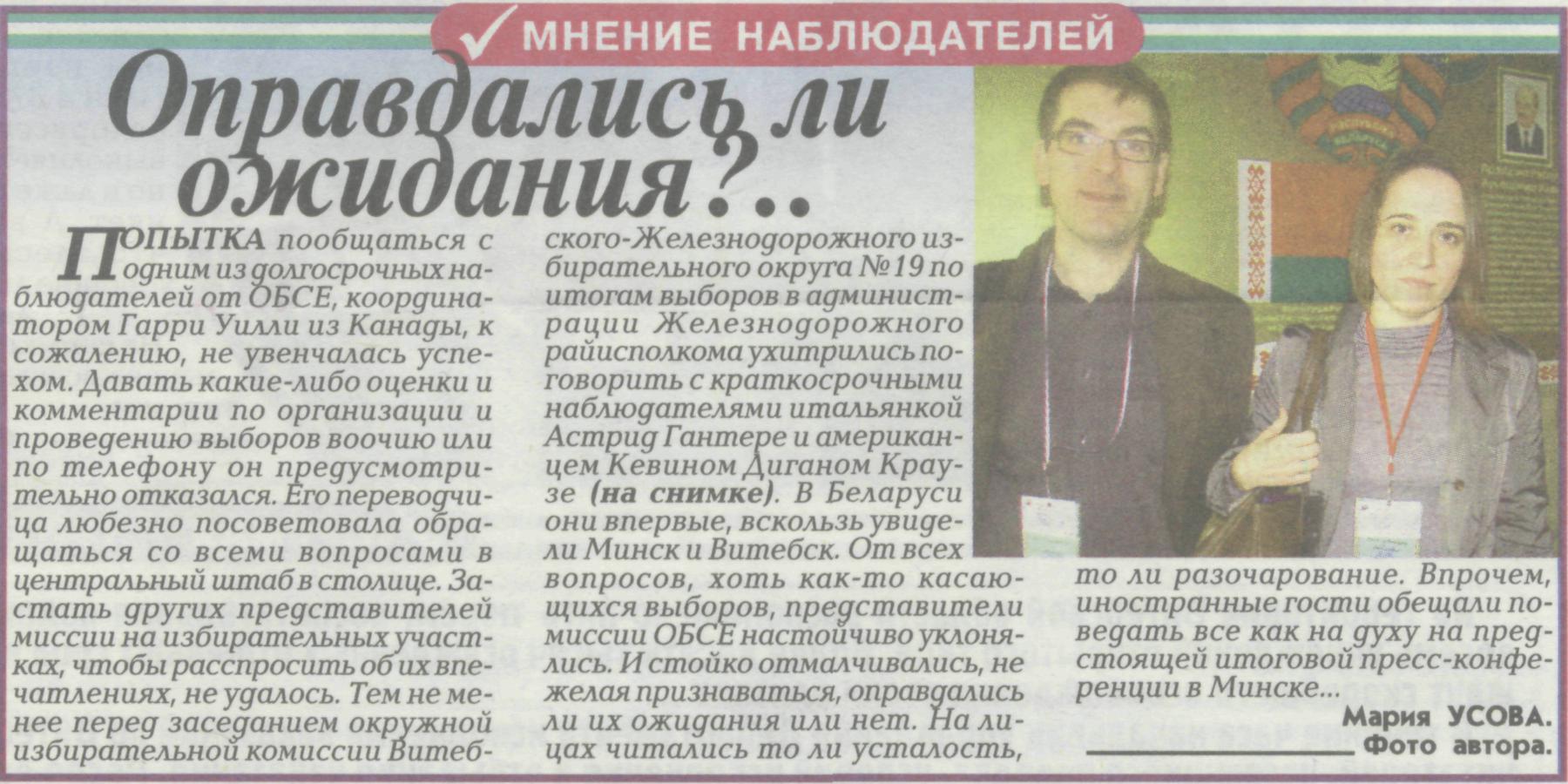 Our attempt to have a conversation with one of the long-time observers of OSCE, coordinator Gary Ouellet from Canada were not successful. He providently refused by phone or other means to make any evaluations or comments on organization or process of the elections. His interpreter politely advised us to address all the questions to the headquarters of OSCE in Minsk. Nor did we manage to meet any other observers at polling stations to ask for their impressions. Nevertheless we were lucky to have a brief conversation with short-time observers Astrid Ganterer and Kevin Deegan-Krause (see photo) before the meeting of the District Election Commission of Vitebsk’s DEC #19 in the regional state administration building. It is their first time in Belarus, and they saw some parts of Vitebsk and Minsk. The representatives of OSCE mission persistently avoided all the questions connected to the elections. They kept silence, not revealing if their expectations came true or not. One could see either exhaustion or disappointment in their faces. Still, our foreign guests promised to answer all questions at the press-conference in Minsk…” (Thanks to our translator and several friends for clarifying the Russian).

Actually I am not allowed to clarify what emotion was on my face that day, but if it was reflective of the faces of those who reported for the OSCE in Minsk that day,  then “disappointment” would seem to be an appropriate choice (see http://www.osce.org/minsk/).

P.S. Search the picture above closely for the Hidden Lukashenka. If you enjoy that, you might want to try this Hidden Picture.

P.P.S. More election observation pictures (taken by others) online at:

I returned two days ago from Belarus where I was an observer in the 2008 parliamentary elections.

OSCE rules request that we leave assessments to the organization’s main report and remain silent.  Fortunately, in this instance, the OSCE judgement so closely corresponds to my own experience that I can refrain from my own judgments and express my own  empressions exclusively through quotations from the initial report.  That report can be found online at http://www.osce.org/item/33272.html.  Unless otherwise noted, the quotations reflect my own personal experience.

The Scope Of The Mission:

The OSCE report perfectly mirrors my own experience regarding the experience of voters in the voting process:

With a relatively minor exception:

What Did Not Go Quite As Badly: The District Election Commission Process

Again, the OSCE report mirrors my own experience regarding the conduct of the aggregation of the count at the district level:

Nevertheless, as the OSCE reports,

What Went Badly:  The Counting Process

Reading Between the Lines:

What to make of an election that combines relatively smooth voting and district-level counting with comprised transparency at the polling-station counting stage?  The OSCE report makes certain suggestions about the possible reasons.  These conform to my own experience.

If, indeed, the non-transparent counting procedures reflect discrepancies, this requires an explanation of how the aforementioned discrepancies could be combined with a relatively transparent voting process.  The OSCE report offers several potential explanations that correspond to my own experience:

And, perhaps most significant of all,

Most interesting of all, is the question of why.  If, as OSCE notes, “The election took place in a strictly controlled environment with a barely visible campaign,” why should engineered discrepancies and falsifications be necessary at all?  The need to make minimum turnout requirements? The desire for overwhelming margins of victory?  Simple habit?  I will leave answers to these questions for other experts and other venues.