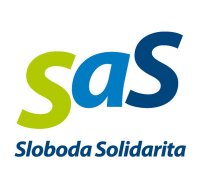 Interesting post today from Richard Sulik, founder of Sloboda a Solidarita (trendily-colored logo is at left, found not on a party website but on a Facebook page), who responds to the charge from SDKU that SaS hurt the right by causing voters to “waste” votes on a party that did not make it over the threshold (http://richardsulik.blog.sme.sk/c/196401/SaS-oslabila-pravicu.html).

Sulik makes interesting arguments to suggest that SaS voters had good reason to vote in other ways and that they might not have voted at all, but he also makes good use of electoral math to make his point:  he uses the electoral formula to show that  reallocation of all SaS to SDKU would only have reallocated the number of seats that went to the right (SDKU would have gained one but KDH would have lost one) and thus that SaS did not impact the final result.  The math looks solid to me and it is nice to see someone respond to arguments by looking at actual numbers and rules.

Nevertheless, it is not as easy to dismiss the SDKU arguments if they are seen as a warning about future elections.  SaS did not have much impact in the European Parliament elections because there were so few seats at stake (13 [Correction, thanks reader “Richard”).  Had it been a parliamentary election (and yes, many other things would have been different as well), Sulik’s argument is not quite as strong.  I’ve reworked his numbers assuming the 150 seats of Slovakia’s parliament at stake.  According to this, calcuation, SaS would have had a significant impact on SDKU votes (which would have gained 6 seats had it received all of the SaS votes) which is partially but not completely ameliorated by its impact on KDH and SMK (each of which would have lost a seat).  In terms of coalition and opposition, this is almost a crucial difference:  from clear parliamentary majority for Smer-SNS-HZDS to a bare majority that would hinge on the decision of only two deputies.

European Parliament Election Results if 150 seats (the Slovak Parliament) were available for election, according to two hypotheses:

Of course this is all theory, but the underlying debate is deeply relevant.  The more the fragmentation on the right, the worse it is likely to do (as the left and the Slovak nationals demonstrated in 2002), but it is not a zero-sum game and it may be true that Sulik’s party brings out new voters.  His ability to mobilize certainly is apparent in this election.  The question for me is whether the best use of Facebook/youtube/social networks is enough to attract the 115,000 voters who will likely be necessary to get a party over the 5% threshold in 2010?  The effort is certainly worth watching.