Four years ago in preparation for the 2010 elections, I came up with an (intentionally) simplified voter’s guide for Slovakia, designed as a flowchart.  No elections are coming up (unless Fico is serious about calling new elections, which I doubt but can’t rule out) but Ben Stanley did such an amazing job with a guide for Poland’s upcoming election in the Why We Study Eastern Europe facebook page) that I wanted to try again. 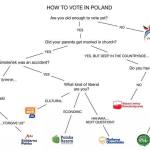 It has been only four years but circumstances are already different.  One party from the 2010 chart is formally gone–HZDS–and several others are in significant decline–SDKU, SaS–and we are seeing an amazing proliferation of entrants (a sort of “Hundred Flowers” campaign, only for parties).  The new chart highlights that newness in a way that is perhaps more biting than I intended, but /is/ remarkable to see one part of the political landscape of any country so divided.  Slovakia’s “right” (by which I mean non-nationalist, non-Hungarian, non-Fico parties) is split up among more parties than the entire Swedish parliament and it has the same adjusted party system size (over 5.0 according to the Taagipera and Laakso formula), and more seem to be popping up every week.

This must be a prelude to some sort of consolidation but if it doesn’t happen /before/ the election, then Slovakia’s right will (again) give away its chance to triumph over Robert Fico.  Even if the right doesn’t lose its necessary margin to small parties, it will face problems: according to FOCUS’s most recent poll, the right and Hungarians could scrape together a majority only if all five elected parties joined together.  The last so-called “zlepenec” coalition had only four (with a fifth one inside, to be sure) and lasted less than two years..  No wonder that some say KDH is thinking seriously about a coalition with Fico.  Or that new parties keep popping up to try to unify the right under /their/ banner.  Alas, the result is usually simply more fragmentation (see xkcd.com: http://imgs.xkcd.com/comics/standards.png).

So with all that buildup, here’s the chart.  And here it is in PDF: slovakia voting flowchart 2014 portrait 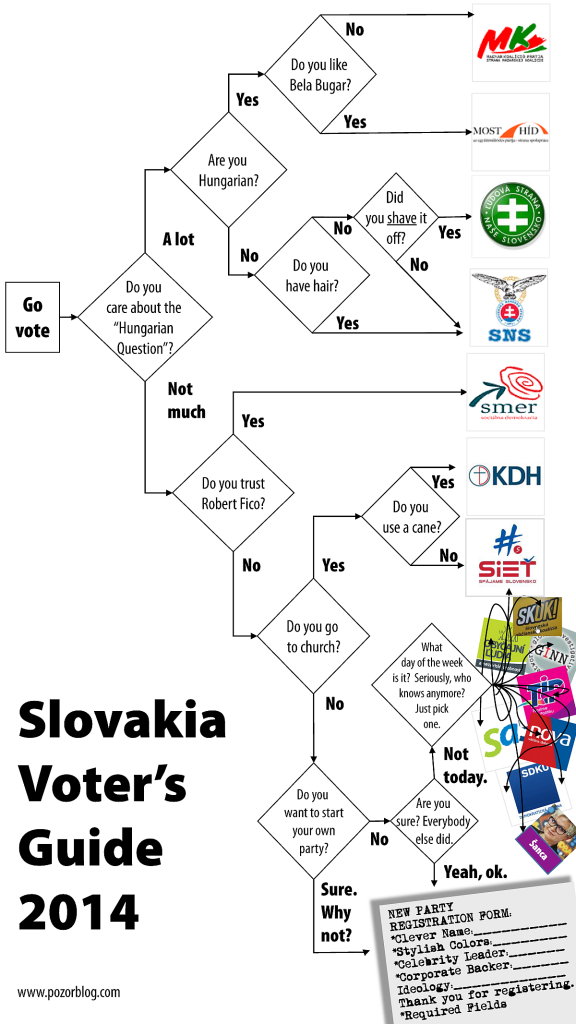