In button form the Austrian flag looks a lot like a “Do Not Enter” sign, but this election at least that did not apply for new parties (of course the thing I am most interested in these days).  There was some significant volatility in Austria this year. In raw party terms, two new parties entered and one existing party left parliament.  There was a minimum of 14.5% shift in votes and a 16% shift in seats (less than in the last election, for which my figures are 17% of votes and 27% of seats, but much more than Austria’s overall average during the post-WWII period.)  The shift was of a different character, furthermore:  whereas nearly all of Austria’s volatility has in the recent past been among parliamentary parties (Mainwaring’s intra-system volatility, Tucker and Powell’s Type A volatility), this year nearly half of the total volatility (6.2% of 14.5) was related to new entries and exits (extra-system or Type B).  In the last election the extra-system volatility was nearly as high (5.9%) but it was outweighed by intra-system volatility (10.9%); in elections before 2008, extra system volatility was barely discernable (averaging only 1.3%).

Particularly notable here is the emergence of the non-traditionally-named Team Stronach whose website ad looks like a blockbuster trailer:

But of course the only interactive website anybody /really/ needs is the one that lets you look at the results yourself, the Political Data Yearbook: Interactive (he said fully aware that this post is simply a plug for that website: 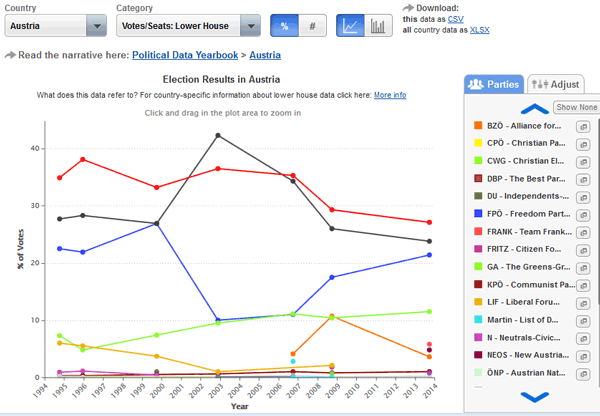 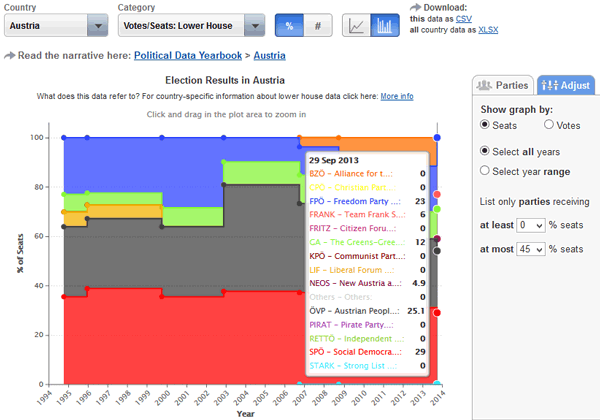