I always bury the lead in these stories and I’m trying not to, so here’s the four sentence summary:

According to current polls Smer is likely to be able to form a government with SNS and would almost be able to form one on its own, but polls are often misleading and obscure narrow margins (particularly with regard to the 5% electoral threshold).  The post below details how I produced several scenarios and a scenario calculator which suggest that the most important role will be played by Smer’s margin (43% produces very different results than 35%) and by the likelihood of some parties to push related parties below the threshold (SNS and Belosouvova’s NaS, SaS and Matovic’s OL) and the ability of others to reach some kind of agreement (the Hungarian parties).  The parties of the Radicova government can theoretically return to government but they will need good luck in the form of some combination of poor Smer results, mutually-assured-destruction among the nationalist parties, and lack of similar MAD by SaS/OL and the Hungarian parties.  But don’t take my word for it: at the bottom of the post is a link to a spreadsheet where you can try your own assumptions.

I live for elections and while it’s always a bit melancholy to see a government fall (some more than others), it also means a new chance to look at the numbers and think about what they mean.  I’ve been channeling my inner Sabermetrician in the last few day and have started to put together some very rough models that might help us think about the important factors in Slovakia’s upcoming elections.  For Slovakia this means thinking about the relationship between polling numbers and votes, shifts in polling numbers over time, the potential for coalition formation and each party’s chance of crossing the 5% threshold.  While it would be possible to start anywhere, I think we can take a few things as given (at the moment–but I promise to revisit them) and take an initial probe into the rest.  For now I will leave aside the question of coalition formation and simply assume that the easiest coalition partners for Fico’s Smer are the Slovak National Party (SNS), or the smaller Movement for a Democratic Slovakia (HZDS) or the new Nation and Justice (NaS), and that (with the potential exception of Freedom and Solidarity (SaS) all the other major parties are capable of making a coalition with one another.  I will also leave aside the question of poll predictiveness because as I found in an analysis conducted before the 2010 (which I will soon repeat using the data from 2010 as well), the predictiveness of poll numbers is actually at its worst about 5-7 months before an election (and there are just under 5 months left until the 10 March 2012 election).  What’s left to us in this case?  The inter-related questions of translation of poll numbers into actual voting statistics and some considerations about the ability of particular parties to cross the 5% threshold. And even with only those two factors at hand the situation is still remarkably complex.

The main cause of complexity is the relatively large number of parties that might be expected to come close to the 5% threshold.  In my estimation there are only three parties for whom the threshold question is not in doubt:  Smer, the Slovak Democratic and Christian Union (SDKU) and the Christian Democratic Movement (KDH).  Far more questionable are the prospects of eight additional parties: SaS, SNS, Most-Hid, MKP/SMK, HZDS and perhaps also SDL, along with two emerging parties, Ordinary People (OL) and Nation and Justice (NaS).   Assuming that any of these parties might or might not pass the threshhold, there are 2^8 or 256 possible combinations of threshold passage among these 8.  As much as I like playing amateurishly with numbers, that is more than I want to deal with.  I will therefore make two simplifications.

This brings our perumation count down 2^6 or 64, which is not small but workable.  We can bring it down a bit more by putting any options with SDL in the background for the moment.  The performance of the resurrected SDL surprised some in the last election, but since then the party has failed to sustain its preferences.  It could rise again–or another new party could rise again–but with NaS and OL running campaigns, the field looks rather crowded for yet another new party to jump in.

These choices bring us down to 32 options in the foreground and 32 in the background.

Having simplified, we need to add a bit of complexity (though not much).  The chances of each of these parties to pass the threshold is not independent of the others–especially of certain others.  Some of these small parties compete for votes with one another.  If one does well the likelihood is that the other will do poorly.  I’ve therefore made certain overall “vote potential” estimates and certain baseline ratios for each combination.  The linked pairs are as follows:

These scenarios are not all equally likely of course, so we can also weight them.  Here again I have just gone ahead and made guesses:

OK, finally, having guessed about vote share and and probabilities to each of these threshold possibilities, I must still make guesses about the vote share of the three larger parties if we are to make any assessment about what kinds of coalition are or are not possible.  I will use three scenarios.  One based on current polling numbers (Smer 43, SDKU 15, KDH 10), one based on the 2010 election numbers (Smer 35, SDKU 15, KDH 9) and one “from the gut” best guess which also happens to be a middle way between these (Smer 39, SDKU 16, KDH 9).   Here are the results (the full results in .pdf format here) and then an explanation: 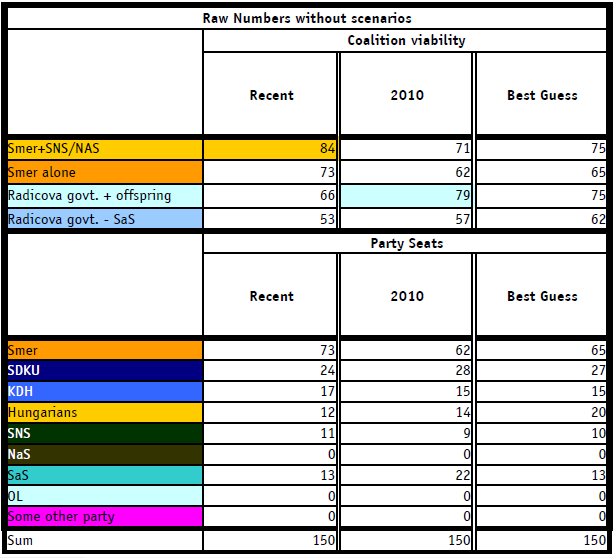 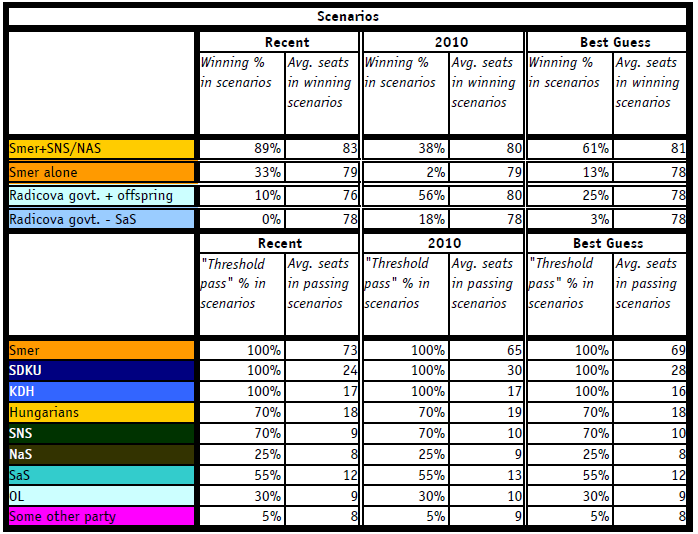 What all of this means

And in an unexpectedly simple twist (most things I do online prove unexpectedly complex) I have been able to upload the entire spreadsheet basis for this onto google documents so that anyone can go and modify any of the assumptions and see what would happen to the results.
I’m pretty excited about this because it really changes the kinds of things we’re capable of (a lot like the “D.I.Y. Electoral College Calculators” in the US.  I would ask only that if you modify the numbers, you change them back so that others can use the spreadsheet as you found it.  Thanks.

Finally, it is worth noting that polling numbers taken 5 months before an election in Slovakia have very little relation to the final result, so while there is a general stability in Slovakia’s preferences–they don’t shift by more than a few percentages in any direction over time, how those votes are split up among specific parties–especially small parties near the threshold–can really matter.  This is what keeps Slovakia’s politics (for better or worse) interesting.

5 thoughts on Slovakia, what comes next? Scenarios and results generator.