Big poll yesterday from FOCUS and I’m trying to get back into the habit of updating these posts when big polls come out, so here goes a try at a quick review of recent public opinion polling events.

The big picture is, as it has been in the past 12 months, a shift away from the government coalition toward the opposition, a shift that has cost the coalition 10 percentage points over the last year and benefited the parliamentary opposition–especially Smer–by about the same amount.  The pattern is an almost mirror image of the last months of the 2006-2010 Fico government, though (as the graph below shows) slightly shallower.  With this month’s polling results, put the current coalition and opposition and opposition almost exactly where they were in January 2010, just six months before the election. 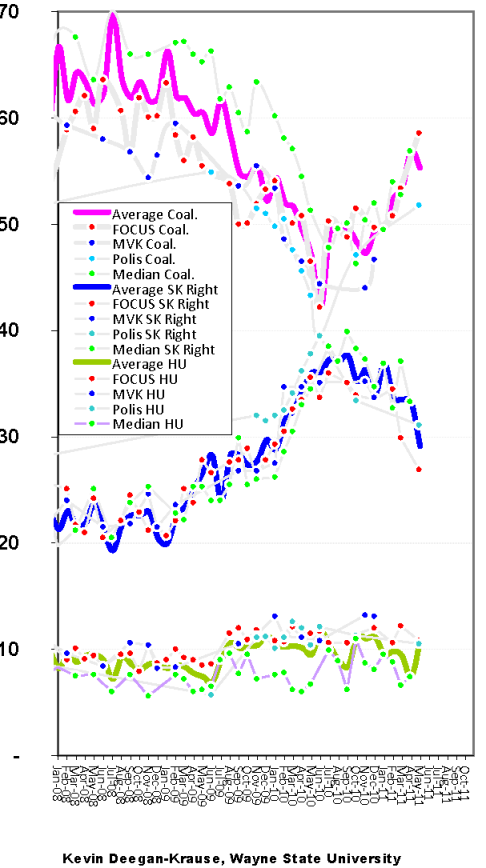 As I noted previously, this can’t be good news for the Radicova government or bad news for the opposition–especially Fico’s Smer–but it is interesting to think how pleased the then-opposition was in January 2010 about its gains in the previous year.  Of course now it’s in the same numerical position and sliding.

As before, the other noteworthy point is the internal composition of the coalition and opposition according to these polls.  Compared to January 2010, Smer has strengthened at the expense of SNS and HZDS.  Within the current coalition, the party strengths have remained surprisingly stable, and the drop has come largely from the ebb in support for SaS, which is not unpredictable but a bit worrisome for the coalition since its current majority would have been impossible without a new party to woo to the polls those secular pro-market voters who were disillusioned with Dzurinda’s SDKU.

Since I am moving now into individual parties, it is relevant to talk about some significant points in the month’s new data:

Parties Below the Threshold:
So one month after describing HZDS and MKP-SMK as “perennials in decline” both parties demonstrate a recovery.  Neither is back above the threshold, and neither is likely to be (except in coalition with somebody else) but they are not in free fall.  For both parties it is notable that two very different polls show parallel patterns of stabilization (for MKP) and slight rise (for HZDS), but also that the absolute levels are very different.  For HZDS, the Median polls have been consistently about a point higher than those of FOCUS, whereas for MKP it is the FOCUS polls that show results a stable 2+ points higher.  The firm Polis has only issued results of one poll this year, in early May, so we do not have a closer trendline, but the overall results are in line with the other polls: for MKP-SMK Polis has tended over time to find a middle level and does so again (an almost perfect mathematical mean of FOCUS and Median); for HZDS, Polis tends to find lower results than other polls (and in this proved the most accurate in the 2010 election) and it does so again in May with a result of 2.5.  A few more Polis polls would help the trendline, but it does not seem to be in their current plan.

The New Parties:
As may perhaps be expected of new parties with less stable electorates (though in retrospect that is simply conjecture and not something I know to be true from any research), Most-Hid and SaS have shown considerable change over time and almost random differences among polls.

All three recent polls put Most-Hid between 5 and 7 percentage points, but the range and patterns vary: FOCUS polls show a sharp decline from last month which was a sharp rise from the month before (suggesting a certain amount of noise around the 6% mark); Median polls show a drop and recovery.  Polis shows stabilization around 7% but with few monthly polls to show any recent pattern.

The decline of SaS has begun to look more serious.  A high result from Median in April contrasted with a low result from FOCUS so it was hard to tell.  This month all three polls show a drop, extremely sharp in FOCUS and (especially) Median and significant for Polis (which had shown the significant drop already late last year).  Given its current level and trajectory, the party will need significant positive news not to fall below the electoral threshold in one of the next two or three polls and produce the headline “SaS falls from parliament” which can itself encourage further out-migration.  Will its voters go to SDKU or to yet another new party?

Among the small but enduring parliamentary parties there is often not much to say.  This month is not much of an exception.

KDH tends to float between 8 and 10.  It is coming off a recent bulge last year when it moved above 10 for awhile, but now it is back down below 10.  There has been a bit of noise here: FOCUS put it below 7 last month but now has it back near 10.  Median has shown it consistently around 10.  Polis, showed a sharp drop last year and has it below 7.  The real answer is probably around 8 or 9, but that’s been the best guess for KDH for about the last 17 years whether one reads polls or not.

The overall trajectory of SNS is flat (which is good news for SNS since its trajectory has been one of consistent decline over the last 2 years and since it does not have too far to go before it falls below the 5% threshold).   Polls seem to take turns being the outlier.  This month the outlier is FOCUS with 8% (last month FOCUS put SNS at 6%).  Median has maintained a more consistent level of around 6% in recent months.  Polis, which consistently polls low for SNS (though as with HZDS was most accurate in predicting election results) puts it below 5%.  The party may gain as voters forget its corruption scandals, but it is not at present built to sustain much more than 5% of relatively extreme voters for whom “the nation” is everything.

There’s no unifying story for the poll results of the two largest parties, so I won’t try to tell one.  Polls disagree this month about how much SDKU has dropped, while they all agree that Smer has risen.

SDKU has dropped in all three polls but beyond that there is no consensus.  Polis shows a small drop from a high level, keeping the party above 18%.  Median shows a slightly larger drop from a slightly lower level, putting the party just below 16%.  FOCUS shows a huge drop from about the same level, dropping it to just above 12%.  Quite frankly for a party leading an rather fractious coalition this is less of a drop than I would have expected, though they do appear to have solid economic results on their side.

The big story, of course, would seem to be Smer so it is rather unfair of me to leave it to the end.  Smer has made quite a show of raising May poles in recent years and so it is perhaps fitting (if bad punsmanship) to note that in this case the May polls raise Smer, and by significant margins: two points in FOCUS, to 47% four points in Median, also to 47%, and five points (over 6 months) in Polis to 45%.  Even more significant, perhaps, is that for once this improvement does not come at the expense of similar parties such as SNS and HZDS, both of which also rose or stabilized this month.  Of course Smer is the natural recipient of those discontented with the current government. It has been relentless and extremely effective in its pressure on the government in a whole variety of realms, with multiple and fairly significant social policy critiques each week, constant pressure on the national issue and with battles over the general prosecutor and an impressive ability to join forces with dissenting coalition deputies on particular votes. Smer’s work over the last year demonstrates the potentially of a disciplined, leader-driven party better than almost anything I’ve seen, and poll results in the 40% range should help it to keep that discipline by allowing it to promise the rewards of office after the next election.

And at present Smer can at least promise the rewards of a solo-government, which must sweeten the deal even more, reducing the worries of some (in the more cosmopolitan/international wing of Smer) about the need for a coalition with SNS.  The question, though, is whether Smer will act on the assumption of a solo government and go after the voting base of HZDS and SNS, perhaps only to find itself achingly close to forming its own government but lacking a few crucial votes and no easy partners, or whether it will try something new: either bolstering (or at least not undercutting) SNS to make sure that it returns to parliament, or cultivating potential allies among existing parties such as Most-Hid or KDH, or perhaps cultivating (even covertly seeding) a new party that could fill the gap potentially left by SaS in the next election.