Some might say that I am ill-equipped to judge local news since my experience of it news comes twice a year when my family stays at a particular hotel that insists on keeping it on during breakfast hours. But if lack of experience with politics can become the chief qualification for political candidates, then perhaps lack of experience with TV could improve the quality media analysis.

Normally, the only people to experience the full brunt of my frustration are the hotel staff–who patiently endure my annoying requests to turn off the TV and my occasional passive-aggressive manipulation of the volume button–and my family which has to listen to me complain during the breakfast hour.  This year, however, I had an insight which I feel is worthy enough to annoy the entire readership of this blog.  So quickly to the point:

During half an hour of morning news on January 2, I saw 10 stories.  There were six topics:

From this list of stories (not overwhelmingly different from those found in a rather more rigorous analysis of Chicago-area TV news by scholars at Northwestern’s Medill School of Journalism and another of Los Angeles-area TV news and newspapers by scholars at the USC Annenberg School for Communication and Journalism), I wish to formulate a hypothesis based on my own personal experience:

Local news stories are chosen by a panel of 5-year-old boys.

I do have a few doubts about this conclusion, but only because of the relative infrequency of stories about dinosaurs and superheroes, which could be caused either by the presence of some non-five-year-olds on the panel, or by the relative absence on that day of good video footage involving dinosaurs or superheroes.

It is also worthwhile considering an alternative view, which begins from the premise that all of the stories except those about football players involved bad/sad things that are unlikely to happen to most viewers.  From this it is possible to formulate an alternative hypothesis:

Local news stories are chosen on the basis of schadenfreude.

Readers might point out that these two hypotheses are not necessarily inconsistent, and I’m afraid they would be right: while most non-German five-year-old boys might have a difficult time pronouncing “schadenfreude my personal experience suggests that five-year-olds are not immune to feelings of satisfaction at the misfortunes of others (especially if the other person is a seven-year-old sibling).

The schadenfreude hypothesis actually needs a bit of qualification, however, because it is not exactly “joy” at the misfortunes of others but rather a heightened sense of self-satisfaction that “something like that” could never happen to me.” Since schadenselbstzufriedenheit does not exactly roll off the tongue, it might be necessary to resort to an alternative formulation offered by Jonathan Haidt of the University of Virginia: karma. 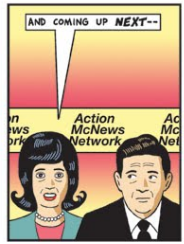 According to Haidt, a significant portion of the American public wants “to live in a country in which hard work and personal responsibility pay off and laziness, cheating and irresponsibility bring people to ruin” (Haidt’s intriguing book proposal is here).

Whether it is five-year-olds or somebody else who is choosing news stories, there is no shortage of bad things happening to (or being done by, or both) other (lesser) people, especially if they involve video clips of something on fire.