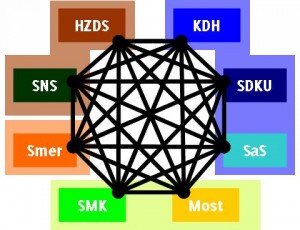 Just a quick post here–since as Slovakia’s election nears I want to move away from essays and toward updates.  Even as I lack the ability even to guess how parties will actually fare in the election, the news causes me to think about what happens after the votes are in and what kind of government will be formed.  As I’ve argued earlier, this depends heavily on which parties make it over the threshold, and since the margins are narrow, that is almost impossible to predict in any meaningful way.  And yet parties have begun to sort themselves in interesting ways.  Interesting here are a series of stories in which parties commit themselves to choosing some coalition partners and rejecting others.  We saw this in last week’s questions about whether KDH and other opposition parties would openly reject coalition with Smer (KDH did, except in the case of a grand coalition; Most-Hid did the same thing shortly thereafter) and whether the current right wing parties would reject coalition with SMK over the Hungarian citizenship law (Radicova of SDKU seemed to do this but then opened the door to withdrawing her rejection if SMK changes its position).  We also have the assistance in this regard of a helpful questionnaire by SME which most party leaders (except Fico) actually answered that asks, among other things, about acceptance of some coalition partners and about “certain rejection” of others.  The various links are here:

I also tag every article I find on the subject of coalition partners with the “coalitionpartners” tag in the social bookmark service “Delicious” and the results (as of this writing 86 articles) is available here: http://delicious.com/kdecay/pozorblog+coalitionpartners.

Together all these articles yield the following record of acceptances and exclusions, which covers nearly all of the 28 possible bilateral relationships among the 8 possible partners, with darker lines indicating stronger sentiments, black indicating acceptance and red indicating rejection.  I’ve separated the acceptance and rejection for the sake of clarity. 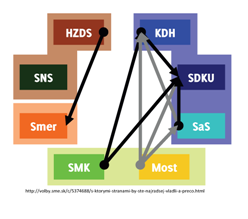 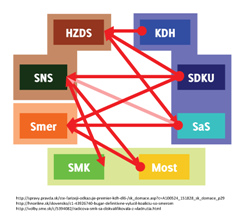 If we take these literally, we essentially move to a situation where just about the only viable possibilities are the current coalition and the current opposition.  In fact according to this, the only relationships across opposition-coalition lines that have not been formally excluded are these three: 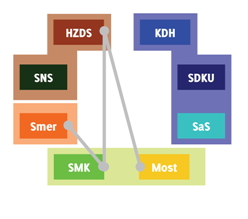 And Smer in indicting SDKU and KDH for previously making a coalitions with MKP-SMK has all but excluded MKP-SMK as a coalition partner (some things are more damning to a coalition than a formal exclusion).

And in any case there is almost no circumstance in which any of these would help create a coalition except, perhaps, the unlikely Smer-SMK-HZDS “coalition from hell” (or as Ben Stanley puts it better than I ever could, “Sounds like a job for the Large Hadron Collider.”  So this evidence points toward either a continuation of the current coalition (hard to manage if one of the two Slovak national parties drops out) or its replacement by the opposition (hard to manage if one of the Hungarian national parties drops out)…

But, as a variety of sources have noted that exclusions, formal statements of exclusion do not mean that a coalition is impossible.  As I’ve discussed above, at my own peril I accepted HZDS’s Meciar statements at face value when he excluded coalition with Slota’s SNS.  As today’s Pravda headline nicely puts it: “Statements of Who-With-Whom need not be taken seriously.”  And as Michal Polak notes in a comment on a previous post,

In Slovak politics, talk is cheap, in my experience. One might blame Meciar, if one is so inclined, with his rich and frequently employed imagination, for introducing this aspect into Slovak politics; but whatever the case, I’d say that Slovak voters are pretty used to things tomorrow being different from what is being said today.

See the rest of Michal’s astute observations here, at the bottom of the page.  It’s nice to have such smart readers.