If a previously unknown astronomer announces the discovery of a major comet, major news outlets might be forgiven for not immediately running with the story.  It could, of course, be another Hale-Bopp (or Deep Impact) or it could be dust on the lens.  This is the problem the Slovak media faces with regard to a recent poll by a survey firm that has never before entered the party preference fray: AVVM, the Agency for Research on Public Opinion. Do media outlets pick up AVVM’s press release and run with it or do they wait for a second or third poll from this firm to see if it is doing good work.  The answer is that they run with it (with the apparent exception, so far, of SME).

So what do we get from a poll by AVVM?  Perhaps something, perhaps not.  AVVM’s website is the simplest imaginable, an out-of-the box 4 page website (one of which is blank) with no logo or other distinguishing characteristics that would say “take me seriously.”  On the other hand AVVM’s director Martin Palasek has worked previously (and maybe still does) for other firms.  I will say this:  AVVM certainly did a great job of getting out the news of its first poll.  A quick search for the firm produces no records from any time before this week, but in the last two days the poll story has already been picked up by dozens of Slovakia’s news outlets.  Before make any judgment about the firm itself, I will wait for first hand reports from those in the public opinion field in Slovakia who may know better.

If we cannot judge from the firm’s records, perhaps we can begin to judge the firm by its results.  This is always difficult, of course, because we have no way of knowing that AVVM is not right and the others wrong.  But to do this we at least need to put the AVVM numbers in context and array them against those of other firms whose accuracy we can judge (and whom we have judged in the past).  The graphs below show individual polls and trendlines with the AVVM result in bright yellow.  The conclusions:

So who benefits from AVVM’s report this week (regardless of its accuracy)?

So what to make of AVVM’s poll overall?  It’s not absurd, not far off, but there’s also no reason to pay it much heed just yet.  With any luck the party will publish a June poll so that we can compare it to final results and make a better evaluation.  Until then I’m not adding it to my averages but I will keep track of it and give the firm an individual analysis. 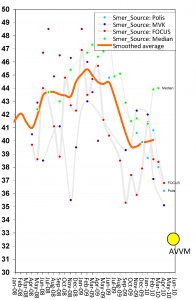 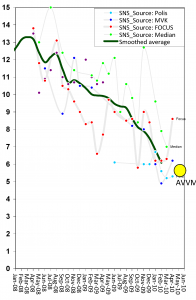 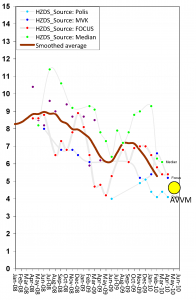 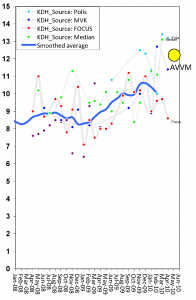 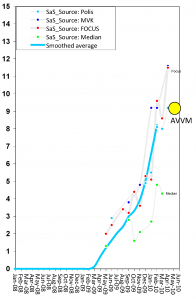 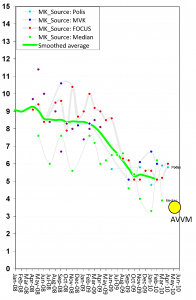 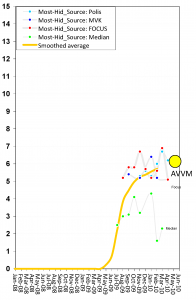 1 thought on The new pollster in town: A quick read on AVVM