I will deal with the actual poll results in a few future posts, but I want build on the introduction of the Czech dashboard by talking about broader trends and in particular by assessing the magnitude of “new party eruptions,” the dominant feature of the current Czech campaign.

In my own recent study of populism and new parties, the Czech Republic has become interesting to me for two reasons: first because it is a “dog that didn’t bark”–its “new party cycle” remained confined to a small segment of the political spectrum for over a decade; and second because (as in Hungary, which just saw its highest degree of new party vote since the fall of communism) the Czech “dog” has begun to scratch at the door and looks set to start yapping.

Several features stand out. First is the relative stability of the three largest parties. The two larger parties, the orange CSSD and the dark blue ODS swapped positions twice during this period but (with the exception of two dark years for CSSD under Spidla and Gross in the early 2002, remained in competition for the top spot well ahead of the others. The red line which denotes the Communist Party stays remarkably stable between 12% and 20%, almost unchanged from month to month for the last four years. Below them the lighter blue KDU-CSL remained in stable fourth place (usually) but showed a slightly declining trend. Together, these four parties have formed the core of the Czech party system from 1992 until the present. Thus far stability.

The second interesting feature is nearer the bottom of the graph, where parties are born and die. The Czech Republic has regularly seen activity in this zone but it has usually been of a particular type, usually a fifth party with market liberal and cultural libertarian positions.  These parties kept the zone filled because they usually exhibited a limited lifespan: ODA lasted from 1992 until 1998, US from 1998 until 2006, SZ from 2006 until (and perhaps beyond) the present. (In the mid-1990’s the Czech system also included a sixth party, the anti-Roma Republicans, but their demise did not lead to a substantial replacement except for the vocal but small DS and NS). The center-right parties account for a considerable degree of the variability of the system shown above, and the combination of stability among the main four parties and the failure of other new parties to emerge kept the “extra-system” volatility low.

This seems to be changing.  The graph below shows the a smoothed line for the combined share of preferences for the top 1,2,3 and 4 parties. Between the early 2000’s and mid-2009 this remained stable, within around 5 points of 90%. But in the last year something new has emerged. 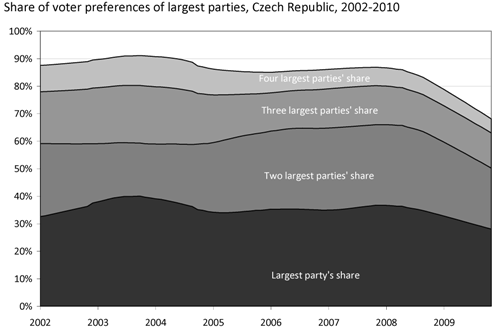 The stability of the Czech system now faces significant changes, and there are good arguments to be made that these are fundamental changes rather than merely cosmetic ones.

Second, the opinion shifts are poised to have a significant shift on the actual composition of the Czech party system. In the past four elections the Czech system has worked like clockwork: the four stable parties gained seats in parliament and the fifth faced a birth-death cycle every two elections (ODA elected in 1992 and 1996, dead in 1998; US elected in 1998 and 2002, dead in 2006) but the cycle has intensified and spread. According to the most recent poll results (available in the Dashboard) SZ does not look likely to follow ODA and US by retaining seats in parliament. Furthermore, there is a not insignificant chance (though also no guarantee) that 2010 will exclude two parliamentary parties–not only SZ but also KDU-CSL is at significant risk–and the birth of two others–both TOP09 and Veci Verejne (VV).

The third shift, a bit smaller, is paradoxically signified by the stability of the Communist Party. In past election campaigns, voters on the left have signaled dissatisfaction with the Social Democrats by opting for the Communists. This year, despite significant dissatisfaction and declining CSSD preferences, the Communists have seen no gains at all. Instead, voters from CSSD have left for Zeman’s SPO and probably (though I don’t have the data) for VV. It is unlikely that SPO will be elected to parliament (its rise has stalled according to the most recent polls), but its ability to attract a a measurable share of the vote suggests that the Communists are no longer the only (or indeed the main) reservoir for the newly dissatisfied (or that if they are, SPO is attracting some of those dissatisfied in turn with KSCM).

The graph below offers a very loose, schematic hypothesis about the ebb and flow of voters within the Czech system. It suggests that the current situation is characterized by the potential for new alternatives on the left and by the emergence of alternatives on the right that draw not only from ODS–there has always been a significant share of voters that agreed with ODS’s positions but did not like the party itself–but also from KDU-CSL. 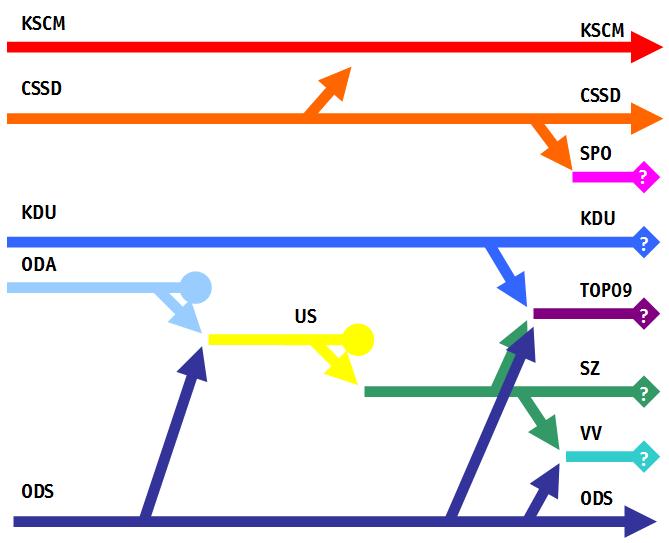 This would be a significant change even if TOP09 were simply a replacement for KDU-CSL and VV simply replaced the Czech Greens, but we are not talking one-for-one replacement here. KDU-CSL has had a substantial membership base and a strong internal organization and a fairly broad intra-party elite; SZ has seen significant internal change but with fairly significant internal competition. By contrast both TOP09 and VV seem to be largely top-down creations without strong membership bases or independent elites outside the top figures. In our research on Slovakia, Marek Rybar and I have found a strong correlation between the date of party establishment one one hand and the degree of party organization and intra-party democracy on the other. Lack of organization in turn weakens the ability of parties to survive the ordinary ups and downs of party fortunes; centralization makes it difficult for parties to cope with the weaknesses of individual leaders (ODS and CSSD have shown a strong ability to recover from crises by changing leaders; in leader-driven projects, voters and intra-party rivals are more likely to turn elsewhere, usually to other new parties. If Slovakia (or almost any other country in the region) is any guide, new parties are shorter lived. Replacement of KDU-CSL by TOP09, therefore, strongly implies the subsequent replacement of TOP09 by some other party. The Czech Republic could therefore come to resemble its neighbors in the region with a churn of new parties that extends beyond the narrow realm of volatility in the Czech center-right.  As Czech dogs say, “haf haf.”