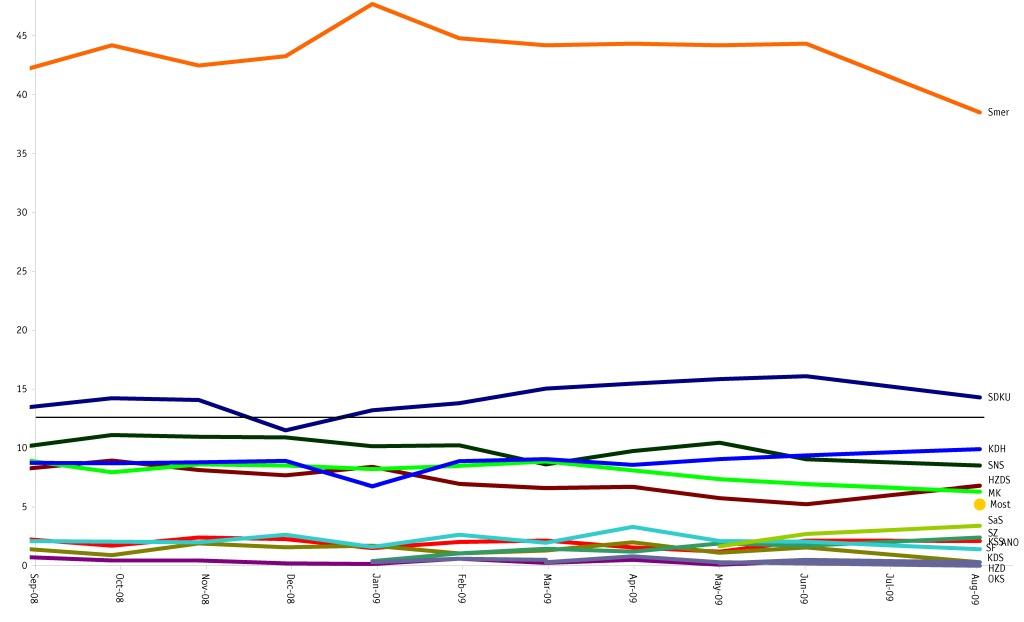 The pattern looks familiar and the lines haven’t changed much, but there are a few ways that this month’s results by FOCUS change our understanding of the current political competition.

I have actually been fearing this change for a long time–not because of the actual politics involved but because of the emergence of a new party.  The graphs in this blog are the product of a long and complex process of fighting with Excel to produce results that can be read by Google’s chart API (about which I understand little, but which is quite remarkable).  That process has produced an elaborate set of calculations which are, unfortunately, based on the presumption of a certain set of parties (and only those parties) gaining election to parliament.  This month holds quite a few big changes in public opinion and one of those–the emergence of Most-Hid with just over 5% of the vote–means that my old systems won’t work anymore.  This is good news, in a sense, because it gives me the impetus to find a solution that will not require as much work (calculating in Excel, creating the google charts, posting separately to Google Docs), but for the moment it makes things more difficult.  I will therefore resort to Excel charts for awhile.  And now, after that pointlessly detailed introduction (I buried the lead again), the graphs and then some thoughts on anybody should care:

And the same graph without the distorting scale effects of Smer: 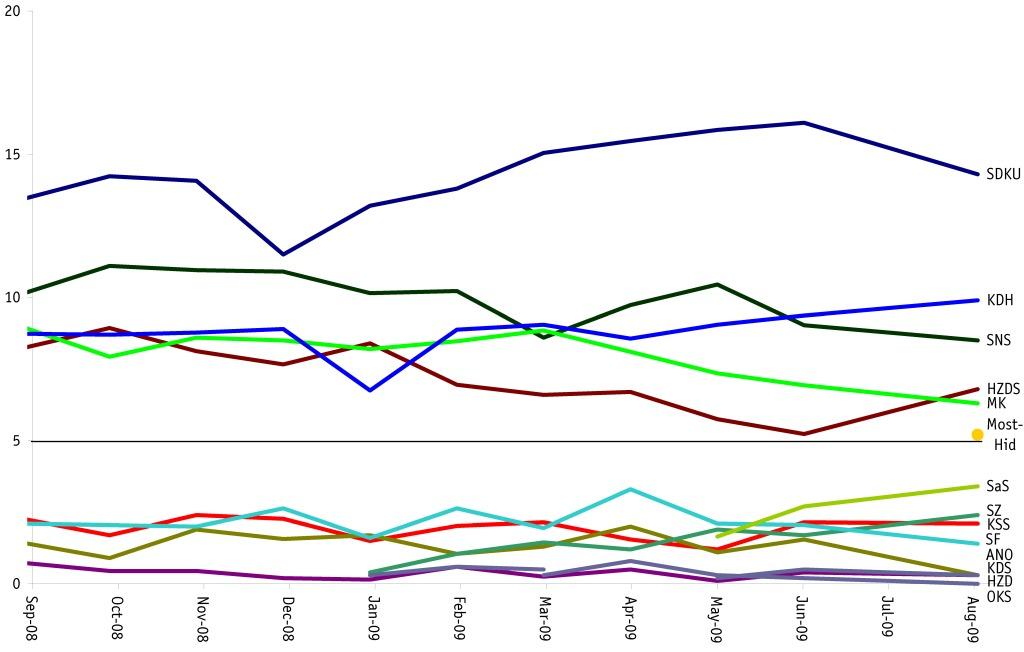 1. Most-Hid might make it into parliament
This may not be a surprise (Bugar is quite popular among Hungarians) but it is important, and the way the numbers fell is important in several ways:

2. SaS has a (small) chance
This is something of a stretch because the party is only at 3.4%, but unlike the other small parties on the “right” it shows a positive trajectory.  KDS has stalled below 0.5%, and Liga appears stillborn (in eight months of polls the party has racked up a total–not average, total–of 1.4%).  OKS and ANO are effectively dead and DS and Misia21 exist only on paper (and barely there).  The big loser in this is probably Slobodne Forum which looked to be doing well in late spring, but SaS’s much better performance in the Europarlament elections appears to have given it the edge.  We have too little data to tell if it is a meaningful pattern, but SaS’s growth so far has been almost perfectly proportional to SF’s decline.

3. Smer’s recent decline continues
There is no real cause for gloom in the party (it is still almost three times the size of the next largest alternative) but it has dropped by nearly 10 percentage points from its (admittedly unrealistic) peak of early this year (when it was four times the size of the next largest alternative).  Since the 2006 election the party has peaked and waned five times, so the variability is nothing new, but this is the first time that the party has dropped sharply from a plateau rather than from a peak.  Of course it is safe never to rule out the possibility of recovery to new heights, but it is more likely that the weight of a poor economy and a large number of corruption scandals, some perhaps not so minor, have begun to take away some of the luster.  This may not be a huge loss for the party as many of those shifting away are likely the supporters who wouldn’t bother to turn out to vote for it (as they didn’t in the Europarliament elections).

How it adds up (Smer’s threshold for success)
The big question is the intersection of the points above:  the emergence of Most-Hid creates two parties that may or may not pass the 5% threshold.  SaS adds a third.  HZDS is the fourth (the party got a slight reprieve this month but even with that the 6-month, 12-month and 48 month trendlines show it dropping below the 5% threshold by spring and only the 24 month trendline puts above by about 0.5 percentage points, though the party’s loyal base also makes it necessary to adjust the numbers upward a bit in its favor).  Since each of these parties could dispose of between 3% and 6% of the overall vote and since the magical 5% makes or breaks the party’s parliamentary representation, a lot will be riding on the results.  My preliminary calculations suggest that in a worst case scenario for Fico–if SaS, Most-Hid, SMK and HZDS all made it into parliament–Smer would need 41% to be able to form  a two-party government with SNS (assuming that SNS’s preferences do not also continue to decline), though it could also settle for a three-party coalition identical to the current one (and it could sustain that coalition even if its own preferences dropped as low as 31%).  If HZDS failed to pass the threshold, Smer would gain some seats from the redistribution but not enough to overcome the loss of a potential coalition partner:  if HZDS falls and both Hungarian parties and SaS survive, Smer would need all of its current 38% to form a two party coalition with SNS.  Of course it is unlikely that all three of the smaller opposition parties would succeed.  If one of them fails, Smer could get by with 33% and if two of them fail, the Smer could form a majority two-party coalition even if it got only 28%.

This all deserves more thought and calcluation.  With any luck I will have opportunity to do just that.