I should probably post something on the presidential election campaign in Slovakia, though there is not much to say, both because the race has been extremely stable and because I simply have not been able to find much polling.  FOCUS has not yet offered numbers and UVVM only started this month (as far as I can tell) and so we’ve only got irregularly and incompletely reported numbers from MVK.  Still, that is something.  The race as we know it appears below.  Gasparovic has consistently led the field, hovering around 50% in every poll except a very early one in 2007 that included likely competitors from the Slovak national bloc (Meciar and Slota).  Radicova, by contrast has hovered around 35% (except in that first poll at a time when she had less name recognition).  Other candidates have gone and come, but Martinakova of Slobodne Forum appears to have a solid 5% and Miklosko of KDS just a bit less.  At the bottom comes the trio of Bollova (former KSS), Sidor (KSS) and Melnik (HZDS) with 2% or less. 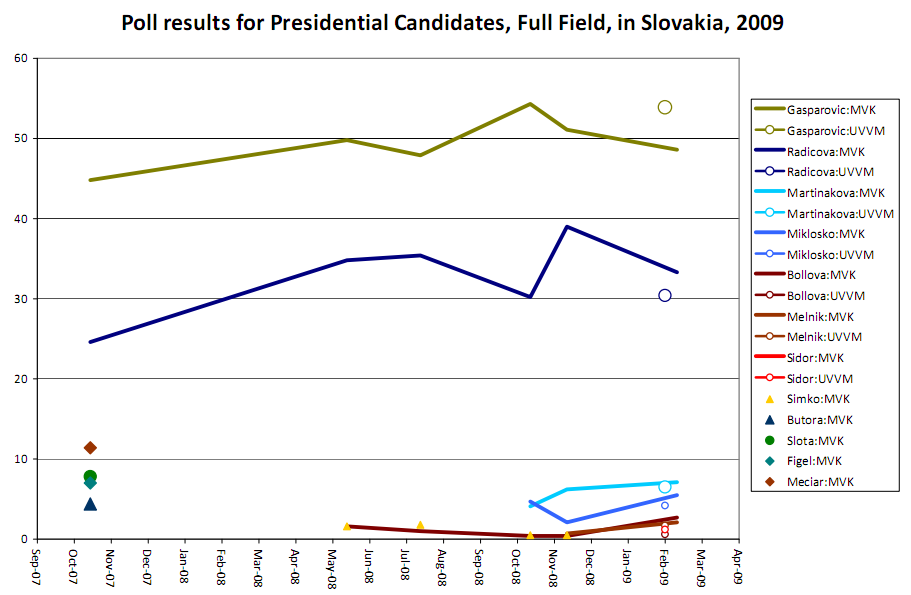 Comparing these candidates with their party results is not always easy or useful but it does lend certain insight into the underlying dynamics of the country’s politics.  Gasparovic has polled 50% when his own former party HZD has languished below 2%. Clearly Gasparovic gains most of his support from Smer and SNS (though he slightly underpolls the combined strength of those two parties).  Gasparovic may also gain some support from voters of his previous former party, HZDS.  This is mitigated to some degree by HZDS chair Vladimir Meciar’s idiosyncratic campaign against Gasparovic, whom he regards as a traitor to his party, but while this campaign may cost Gasparovic some votes, it certainly has not been successful in luring voters to HZDS’s own candidate, Melnik, who stands at 2%, less than a third of HZDS’s 6% (and it shows HZDS’s continued decline).  Bollova and Sidor together attract more votes than KSS, but only by about a half of a percentage point, so it does not seem that these alternatives on the statist left draw many voters away from Gasparovic.

Perhaps the most interesting question is on the right.  The parties of the right (including the Hungarians) consistently poll about 35%, about equal to Radicova’s total, but Radicova likely shares the vote of that bloc with Martinakova and Miklosko who together poll around 10%.  This means that either Radicova or the other two (or all three) pull some voters from uncommitted voters.  Martinakova outpolls her party by about 3-4%) and Miklosko’s party has only about 1% in the polls, so virtually all of his vote comes from partisans of other parties.  It is difficult without the actual data to assess the ebb and flow here, but it would appear that the presidential candidates of the right-wing parties are, by a solid margin, more popular than the parties themselves, and this suggests some room for growth on the right side of the political spectrum (but only if those parties were to seek out new leadership, something that KDH and SMK–but not SDKU–may currently be thinking about).

The potential gain becomes most obvious in those polls that pit Gasparovic directly against Radicova.  In these, surveys (of which we have only two, both conducted by MVK) Radicova draws closer to Gasparovic, gaining an average of 8% compared to Gasparovic’s gain of 5%.  This is to be expected since the candidates closer to Radicova (Martinakova and Miklosko) have more support than those closer to Gasparovic (Bollova, Sidor, Melnik), but it is still noteworthy since it suggests that a moderately charismatic candidate of the right can gain significantly larger numbers of voters than do the parties of the right. 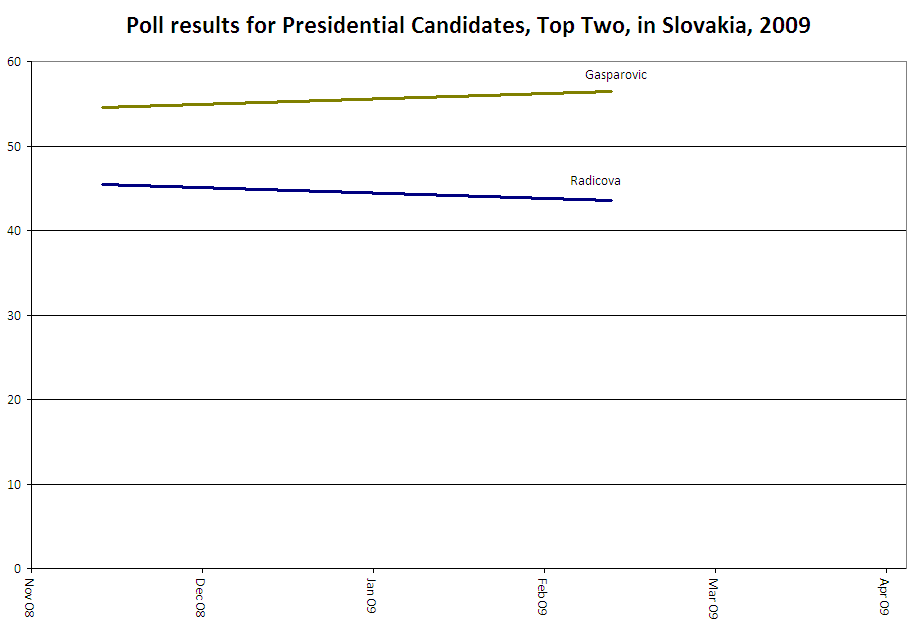