In a previous post I noted a growing gap between parties above the threshold of electability and those below, one that was unusual by Slovakia’s standards.  Thanks to the generosity of UVVM, FOCUS and IVO, which opened various archives to me during my time in Slovakia, I can now show a much longer time series (though numbers before 1999 are sketchier than those after because of a relative dearth of polls and less systematic methods of reporting. 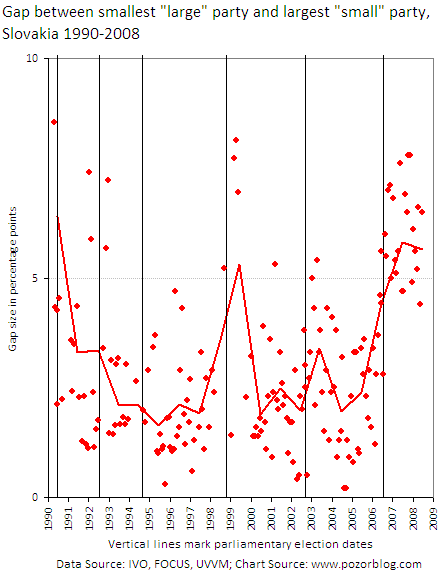 Something is clearly changing.  With the exception of a few surveys in 1999 (like the result of the temporary consolidation of small parties into the Slovak Democratic Coalition) there were very few gaps larger than 5% from Slovakia’s first election in 1990 until its most recent in 2006 (in fact only one in twenty polls during that period showed such a large gap) whereas since 2006 there are almost no gaps smaller than 5% (only about one in ten).  In fact the band around the threshold of viability now utterly empty: since the 2006 election not a single party has had a monthly polling average in the range between 3.3% and 7.2%. Not one.

As might be expected, the gap has meant a sharp reduction in the overall share of preferences received by small parties.  The graph below shows the same trend. 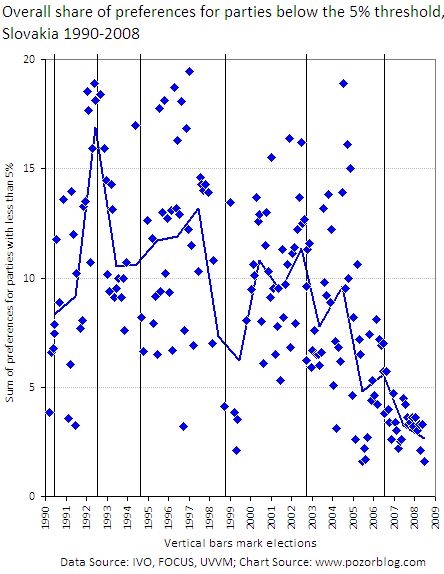 Small parties used to collect about 10%-20% but this is no longer the case.  The total number of preferences for parties below the 5% threshold in August 2008 was 4.2%. Put in other words, even if all the supporters for obscure parties banded together (not very likely), they would not together have enough to cross the threshold. Between the 1990 and 2006 elections only 17 of the 161 months with surveys showed a sum below 5%; since the 2006 elections only 1 of the 26 months shows a sum above 5%.

There is no single clear explanation for this change but there are several reasons that might make sense:

The current “all-or-nothing” pattern of party support does not mean that there is no chance for new parties, but it does suggest that it is even more difficult for a party to to climb its way up from below as KSS did in 2002.  As before, new parties will need to drop in from above as big splinters of even bigger parties with dissatisfied electorates (DU, and to some extent ZRS and Smer) or as saviors (Smer, ANO, SOP).